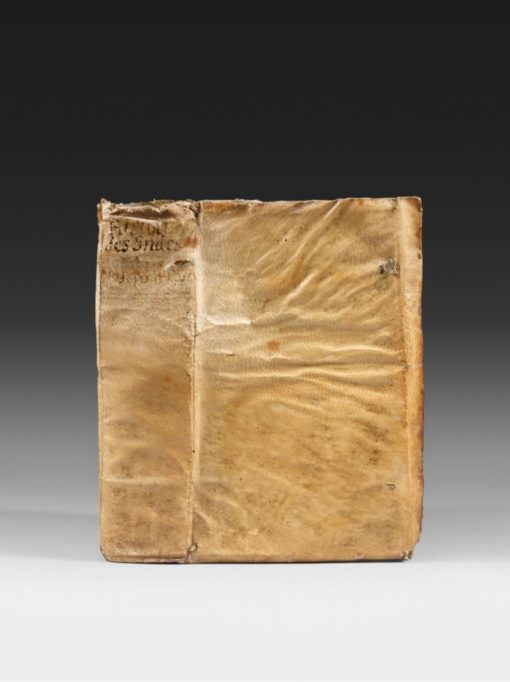 An attractive copy preserved in its contemporary overlapping vellum

Contemporary limp vellum with overlapping edges, handwritten title on spine, small piece cut out under the title without loss to erase a handwritten ex-libris. Contemporary binding.

« Father J. Acosta, born in Medina del Campo around the year 1539, joined the Society of Jesus before age fourteen. In 1571, he traveled to the West Indies and was the second provincial from Peru, where he lived for sixteen years. He died rector of Salamanca on February 25th 1600. He is one of the first to philosophically broach America and its productions. His book had a great reputation and was translated into almost every European language. Pinelo says one cannot read it without admiration » (Leclerc)

« Father Acosta spent a great deal of his life in America ; his work was very esteemed, and rightly so, and was translated into almost every language » (Ternaux 182 et 226).

« The first and, in the 16th century, most certainly only travel journal written by a scholar with a philosophical intention. This work turned out to be very influential in the 17th century. Acosta is, with Raleigh, one of Bacon’s principal sources on the New World. Acosta’s narrative deserves particular attention because it offered the authors of the 17th century not only a wealth of information on Peru but also a moral and philosophical lesson on discoveries, told in a way that was the most explicit and easy to use. The physical and cosmological categories, in the sense of Aristotle, structure and orient the « natural » description of the West Indies. The first book is dedicated to cosmography ; he describes in the second book the skies of the New World, all the stars that one sees » (P. Hamou, La mutation du visible, p.23).

« The Spaniards are suspected of having hidden from us the Strait of Lemaire in order to close off any passage to their rich provinces in America. Word is that, through a public edit, they burned all of Acosta’s copies of his « Natural and Moral History of the Indies » in order to deprive the other nations and seal them off from any knowledge of the Indies » (Anquetil-Duperron).

In the dedication to king Henry IV, the translator, Robert Regnault, exhorts the king to turn to the New World.

As a worthy successor to the Valois, Henry IV disputes the Iberian stronghold on the New World. He dreams of seeing his subjects settle in Brazil and looks to creating establishments on the coast of north-east America, in order to ensure his kingdom’s control over the cod fishing industry and the fur trade.

Written notes from a previous owner can be found on the margins on numerous occasion.

The only work mentioned by Chadenat had a modern binding (Chadenat, 5487).