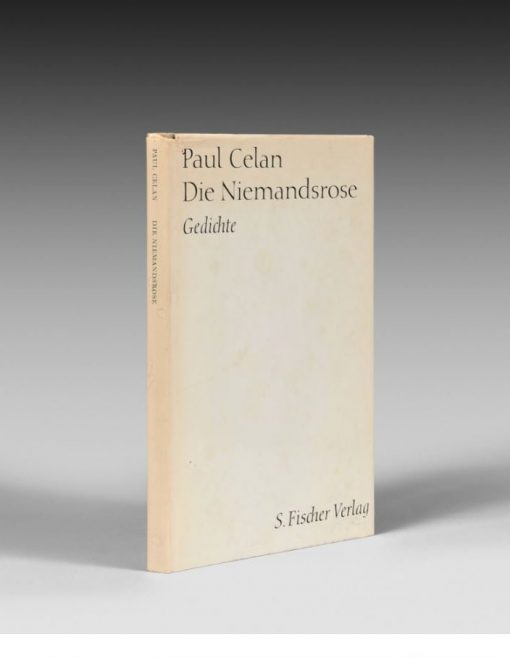 First edition of this important work by Paul Celan

“on Jewish destiny, an emblem of the tragedy of contemporary history”

A precious copy including a text by the author
to the literary critic and philosopher Yvon Belaval,
preserved in its publisher’s cloth and jacket, as issued.

Rare and sought-after first edition of this great work by Paul Celan “on Jewish destiny, an emblem of the tragedy of contemporary history”.

Copy including a text by the author to the literary critic and philosopher Yvon Belaval.

“With the publication of “Sprachgitter” (1959) and “Die Niemandsrose” (1963), Celan’s work moved into a second phase. These two central collections marked the height of his undisputed acclaim in the German-speaking world. For reasons that have to do not only with his subsequent development but with the almost exclusively political and social interests that became predominant in West German literature in the later sixties and early seventies, fewer and fewer of his readers and critics were prepared to follow him into what they regarded as the increasingly private world of his later poetry.” (Michael Hamburger, Introduction to his translations of Celans “Poems”, 1989, p. 20)

Nobody’s rose (Die Niemandsrose) is a collection of poems by Paul Celan.

“A Jewish German-speaking poet of French nationality, Paul Celan, shortly after his death, was already a very important member of world literature. A writer of the post-Auschwitz movement, his work raises some of the major interrogations of our time.” (Martine Broda)

This book “on Jewish destiny, an emblem of the tragedy of contemporary history” is dedicated to the Russian poet Mandelstam.

In addition to its literary qualities, this work is also praised for its philosophical poetry, as the commentaries by Jacques Derrida of some of his poems show. Furthermore, like the rest of Paul Celan’s work, this collection draws its inspiration from the Shoah, and could be interpreted as an element of a dialogue with Vladimir Jankelevitch, or also like a challenge to Theodor W. Adorno, who said that “writing a poem after Auschwitz is barbaric because any culture consecutive to Auschwitz is just garbage” and whose conference Paul Celan attended in Paris.

“The Jews’ country has been transported to nowhere by the Nazis. The part taken up by the Jewish themes, which are more important here than in his other works, can be explained by a will, probably deriving from an incomprehension, to take his commitment to Jews further, by opposition to all his traditional priorities, Greek or Holderlinian, which were destroyed in the massacre that they contributed to.”

“Celan lived through the Jewish Holocaust. His parents died during it. It is like an absolute night that obliterates all possibility of history or of real life. Later, he experimented with the impossibility to put down roots in Western civilization. His poetry leans towards the edges of silence, it is a word ripped from the absence of words, and is the fruit of this absence, of his refusal and inability to communicate through lies and alienation. With great audacity in terms of vocabulary and syntax, these difficult verses sew together his denials, the expression of the only sentiment that can authentically exist. Celan himself disappeared in the night, in the waters of the Seine where he sought death. One of his verses says : “I make light behind me” ; his poetry is this lightning that indicates the place where he disappeared, taking his verses with him.” (C. Magris, Danube, Paris, L’Arpenteur, 1988, p. 393-395).

A beautiful and precious copy of this rare and important first edition, including an added text by the author and preserved in its original publisher’s cloth and jacket, as issued.

First edition of Celan’s most important collections dedicated to Mandelstam.

A presentation copy, signed and inscribed by Celan to French literary critic Yvon Belaval in the year of publication.

Yvon Belaval (1908-1988), who considered Paul Celan “a great poet”, was a French philosopher and philologist who specialized in Leibniz and the 18th century. Paul Celan had met Yvon Belaval through the Editions Gallimard where he spent a lot of time in the 1960’s. On 14 March 1962, he received his first letter from him. When Belaval dedicated his book Remarques to him, he was already celebrating the “great poet Celan”.