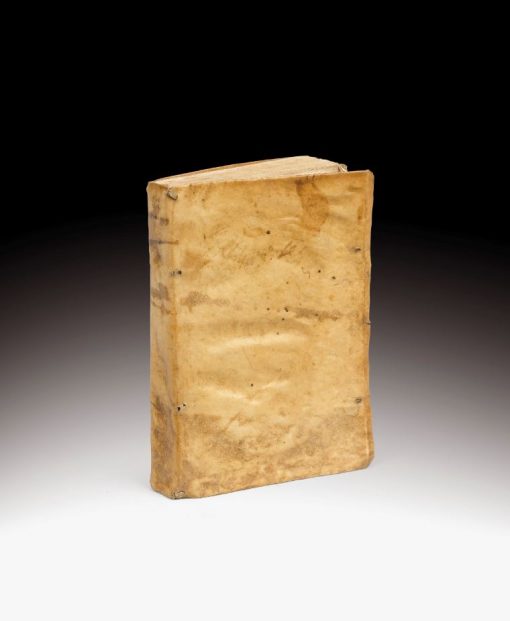 “Since Rabelais, the Gallic genius had not

produced anything as controversial” (Yves Cazaux)

First issue, very rare (unknown to Yves Cazaux, the official bibliographer of La Satyre Ménippée) of the second very enlarged edition of La Satyre Ménippée, published at the beginning of the second semester of 1594, a few months after the first, « one of those texts whose literary qualities as well as its historical and political content assured its extraordinary success and its passing into posterity, into the pantheon of literature ». (J. P. Barbier).

Several elements of the text indicate this is one of the earliest editions :

2) Article II on the effects of the composed Catholicon drug has not yet been divided in two.

3) The scatological episode (pp. 38-39), where a mistake is made on the intended, was not corrected as it was in later editions. (V. Yves Cazaux)

« Since Rabelais, the Gallic genius had not produced anything as controversial, writes the last bibliographer of this book, Yves Cazaux, (Revue française d’histoire du livre, n° 34, 1982, p. 3). Charles Nodier, who had reedited the Satyre in 1824, noted that it was here that the French spirit and character brilliantly shone.”

Pierre Champion considered the book : “A grandly patriotic book, and making good sense, summarizing our history, seen from the angle of the divisions fired up by foreigners in order to weaken France.”

“Taking advantage of the French Wars of religion, the house of Lorraine tried to seize power, under the cover of the Sainte-Ligue, the general union of the Catholics created in 1576. Henri of Guise rallies Paris against Henri III (journée des Barricades, mai 1588), but the king has him assassinated and strikes a deal with the « Béarnais », Henri of Navarre, heir to the crown. The Ligueurs are vanquished in Senlis in 1589 but Henri III is himself assassinated by Jacques Clément. Henri IV, a protestant prince, has to conquer the throne. He is supported by those of his creed and by the Politiques, a moderate party who wants the end of the civil war.

Paris is in the hands of the “Seize”, representing the sixteen neighborhoods of the capital, who are motivated Ligueurs. They instore a reign of terror, protected by a Spanish garrison. The duke of Mayenne, brother of Henri de Guise, is appointed lieutenant-general of the kingdom. However, Henri IV, the winner at Arques and Ivry, lays siege to Paris. In the capital, there is great miscontent : moderate Catholics (the Ligueurs are “zealed Catholics”), backed by Parliament, assemble around a former provost, d’Aubray. Mayenne has to call for the États Généraux (1593). This assembly, charged with naming a king, refuses to do so. But soon, Henri IV, in order to bring peace, abjures his protestant faith, and Paris opens its doors to him.”

The Satire Ménippée is the collective work of a group of Parisian bourgeois, who are happy to salute the defeat of the Ligue and the victory of reason : the canons Gillot and Pierre Leroy, the humanist poet Passerat, a scholar, Florent Chrestien, and the lawmen, Gilles Durant, Rapin and Pierre Pithou. The small verses scattered in the text are by Passerat and Rapin ; the Harangue de M. d’Aubray, an essential piece, is attributed to Pierre Pithou. The title recalls the cynical philosopher Ménippe (IIIrd century BCE) and is meant to suggest a language that is frank, brutal and burlesque.

The intent is to make fun of their opponent by making him sound stupid or cynical. One after the other, the champions of the Ligue give speeches that are devastating for them. It is a process which the ironists of the 18th century, like Voltaire, will use at will. The gross blunders provoke enormous laughter, as they make no sense. But it is also necessary to alter the tone, and the Harangue de M. d’Aubray exposes in a serious and even eloquent way all of the reasons in favor of Henri IV and peace. The authors know their rhetoric ; they draw from Cicero and comfortably manipulate periods, apostrophes, exclamations and oral interrogations. Their language is full of sap, it has this straightforward but also imaginative vigor that is so characteristic of the 16th century. This work is sympathetic in its clairvoyant patriotism ; dynamic, even though it is sometimes too long, because of its very French qualities ; full of good-humored irony, recalling Rabelais’s verve, and warmly eloquent, and all in service of measure and reason.

“La Satyre Ménippée is a crucible where many literary forms and traditions melt together. It recalls the ancient “satire” to which it lends, thanks to a fake etymology, the formal and linguistic creative license of the mythological satires. The term “Ménippée” also recalls Ancient Greece, the word was used to design a work of mixed prose and verse. And they abound in these texts by Pithou and his friends: quotes from Greek and Latin poets, pseudo-popular songs that mock Mayenne’s corpulence or the scattering of the Catholic troops at the battle of Ivry.

These verses introduce French good humor in a rather somber scene and recall that Rabelais’s country has no intention of living in a time of penitence, as suggested by the Spanish austerity or the council of Trente. There are numerous references to Rabelais in the themes and burlesque motifs of the Satyre Ménippée. What has made, all in all, this work so successful is the perfect way in which the form adapts to Henri IV’s ideology. It is the triumph of religious freedom (which the édit de Nantes will confirm in 1598) and literary freedom.” (D.M.)

A beautiful copy of the first issue, preserved in its remarkable contemporary binding of ivory vellum. In May 2011, the copy from the second issue, bound in the 19th century by Cuzin and coming from the library of Eugène Paillet, was sold 27 000 € in Paris.

This work was given by the royal Parisian printer Jean Mettayer, who found refuge in Tours.

Yves Cazaux identified no copy from the first issue, which makes this one quite rare.