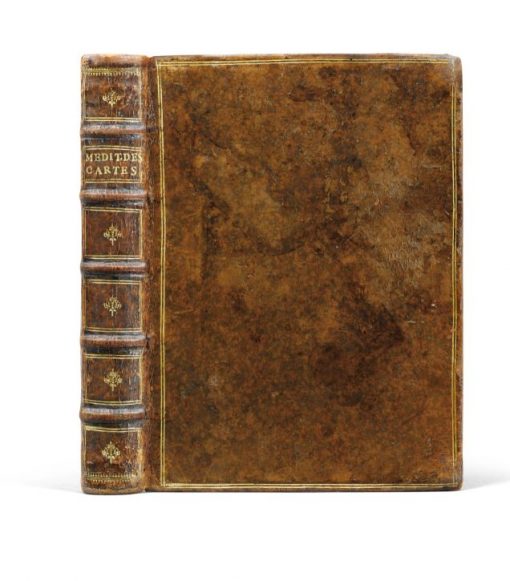 “Les Méditations had a decisive influence;

they were an active catalyst for the philosophers that came after.

In that regard, Descartes can be considered

the father of modern philosophy.”

reviewed and edited by Descartes.

“Descartes personally reviewed the French translation of the Méditations and cleared up a few passages that were obscure in Latin.” (Tchemerzine)

“The author reviewed the translation, made corrections and took care to clear up certain passages where the meaning in Latin was obscure.” (Brunet)

“The beautiful adaptation that [Descartes] himself supervised of the Latin version of his Méditations.”

Descartes’s major work, the Méditations are important because they are an expose of Cartesian metaphysics and the foundation of the author’s rationalism.

“The Méditations had a decisive influence ; not only did it introduce a new criteria for truth and put reason at the center of the intuition of life, thus opposing the pretentions and authority of tradition and custom, but it raised some of the major problems of metaphysics. It was an active catalyst for the philosophers that came after, giving rise to tenacious partisans or opponents : Malebranche, Spinoza, Leibniz, Locke, Berkeley, Hume, up until the reconciliation of intellectualism and empiricism was accomplished by Kant. In that regard, Descartes can be considered the father of modern philosophy.”

Through his faith in the power and unity of science, Descartes reunites in a very coherent and rational way the entirety of human knowledge, and unifies it by subordinating it to the existence of a creator.

Through his rational explanation of nature, he reveals himself to be a pioneer of modern rationalism.

“René Descartes is mostly known for being the pioneer of modern thinking.” (H. Méchoulan)

“Definitive founder of a new vision of the world, Descartes raises the art of thinking to new heights by disrupting, innovating, taking the first steps and clearing a new path for philosophy.” (Yves Peyré)

A beautiful copy preserved in its fine contemporary binding.