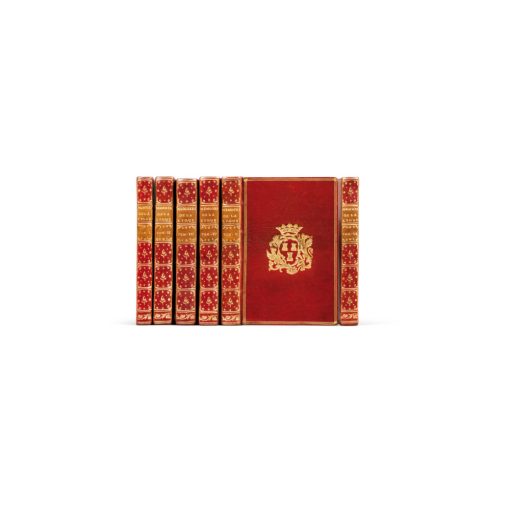 Four extremely rare first editions (cf Brunet) of these interesting memoirs of the Ligue by Simon Goulard (1543-1628), a Protestant polemicist living in Geneva since 1566.

He started publishing in 1587 a recueil des choses mémorables advenues sous la Ligue qui s’est faite et élevée contre la religion réformée. These “small memoirs on the Ligue” regularly acquired new texts as the revolt continued to expand ; in the end, they made up six volumes.

“Whatever the passions that animate Goulart, his work, which borrows material from all parties, is priceless. By itself it constitutes a real library.” (H. Hauser. Les sources de l’histoire de France, n° 1566)

Minister of cult living in Geneva, he replaced Th. de Bèze at the head of the Compagnie des pasteurs (1607-1612). A precious individual for the Genovese Church who always refused to let him go, he was frequently asked to travel to other protestant cities to support the cause and hold mass. His frankness earned him many reprimands by the ecclesiastical authorities (1593-1607). Many cities tried to attract his services but Geneva always managed to keep him. He consolidated a vast humanist work, translating Plutarch, Justus Lipsius, Xenophon. He wrote a comment on the Sepmaine by Du Bartas, which went on to be reprinted numerous times because of its large audience and authority. He also wrote historical texts, participated in the translation of the Bible, and wrote books. The latter earned him the esteem of his contemporaries, notably d’Aubigné. According to O. Pot, S. Goulart had inherited from Th. de Bèze the “project of a protestant poetic”, and his contribution to the preface of the Spiegel…, G. Fabri’s encyclopedia in verse, seem to suggest the design of a Protestant literary academy that would spread through all of Calvinist northern Europe. But if this project never came to fruition, at least, from the publication of the Mémoires de Charles IX to those said to be de la Ligue, he did manage to show his immense talent as a polemicist and militant journalist.

A precious and beautiful copy bound in red morocco with the arms of Madame de Pompadour.

“Everything has been said on Madame de Pompadour, born in 1721, but the influence she had at the time, both on the arts, which she encouraged, and the letters, which she protected, is so considerable, not to mention the fact that the delicate and exquisite taste she displayed marked her rightful place among the great amateurs of the past centuries, that we cannot dispense with dedicating her a few lines, if only to better put into perspective the wealth of her beautiful collection, now dispersed.

From an artistic point of view, she had great influence on her era : “She inspired good taste and the arts during the period she called her “reign”, says the baron Roger Portalis, in his nice book on the Dessinateurs d’illustrations au dix-huitième siècle. It is under her influence and inspiration that Carle Vanloo and Boucher painted, that Bouchardon, Coustou, Falconnet and Pigalle sculpted their marbles ; that Cochin and Eisen drew, that Guay engraved his stones, and each of these artists’ work bears the Pompadour seal.”

A precious copy coming from the libraries of Robert Hoe (ex libris, lot 306 from the catalogue of the sale of the collection. Part III. 1912) and R.S. Turner (ex-libris).