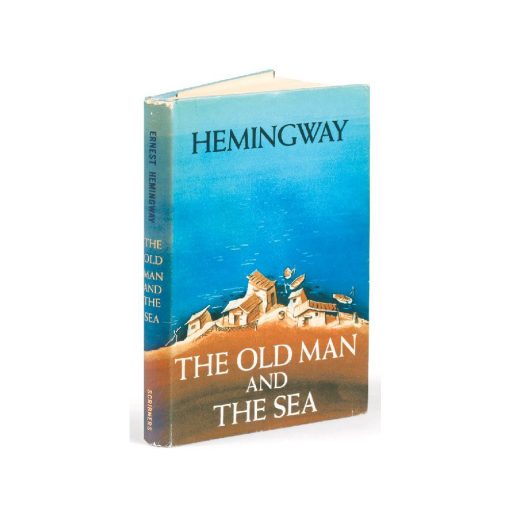 Ernest Hemingway
The Old Man and the Sea,
1952.

First edition and first issue of The Old man and the sea,
Hemingway’s masterpiece which earned him the Pulitzer prize
and the Nobel prize of literature.

A beautiful copy, very pure, preserved in its publisher’s case
and dust jacket, as issued.

True first edition and first printing of one of Hemingway’s masterpiece, with the Scribner’s “A” and seal on the copyright page and no mention of Nobel Prize on the dust jacket.

First edition and first issue of The Old man and the sea, Hemingway’s masterpiece which earned him the Pulitzer prize and the Nobel prize of literature.

The Old Man and the Sea won the Pulitzer Prize for fiction in 1953 and was cited in the announcement of Hemingway’s Nobel Prize in 1954: “for his mastery of the art of narrative, most recently demonstrated in The Old Man and the Sea, and for the influence that he has exerted on contemporary style”.

There is a Hemingway legend like there is a Fitzgerald legend. Hemingway was, in his lifetime, and still today, and probably will always be the most famous and read of all American writers of the first half of the 20th century. Born in an upper-class family of Illinois, USA, Ernest Hemingway (1899-1961) first worked as a reporter and then dedicated himself to literature. He fought in the Spanish civil war and took part in the Allied landing in France as a war correspondent.

“With The Old Man and the Sea, the last book to be published while he was alive, and which earned him a Pulitzer prize and a Nobel prize of literature, Hemingway had reached the top. Hemingway’s work is among those who have most influenced modern literature.” (Michel Gresset)

“”He was an old man who fished alone in a skiff in the Gulf Stream” ; gestures as old as time engraved in a language that claims to be timeless and for all times — and all of the story is written in this style.

The old man’s name is Santiago. It’s been weeks since a fish has bitten on one of his fishing lines but he still has hope and, for the 85th time, he takes to the sea. At dawn, he goes out to sea ; at noon, he catches a great fish. The struggle will be difficult because the animal stays deep and drags the skiff ; hours pass and night comes and nothing interrupts this race during which both adversaries give it the best they’ve got. A second day goes by and there doesn’t seem to be a decisive outcome and Santiago starts to admire this fish who forces him to stay sharp. At the end of the third day, the silver swordfish finally shows his purple stripes.

It all should end with a victory chant but man’s victory is only the beginning of another struggle. The swordfish’s blood attracts sharks, they circle the boat and start devouring the defeated fish. Santiago knows he will not be able to save his fish but that doesn’t stop him from trying to do so, all night, until complete exhaustion. All that is left of the beautiful animal is a long white backbone ; that said, it is not the story of his failure that the man brings home. By refusing defeat, he forever enriched a whole community, and the old and young who wait for him now know why they admire him, this man who made, in solitude, an exemple of their hopes and despair.

“The Old man and the sea sort of represents what Faust was for Goethe : the idea of an accomplished youth in old age. It reveals the birth in American literature of a great myth which Melville’s Moby Dick and Steinbeck’s Pearl were exemples of. With The Old Man and the sea, the myth takes on a prodigious development and becomes a magnificent symbol of human destiny (…). Does the conclusion represent Ernest Hemingway’s philosophy, this despairing conception of the uselessness of the struggle that could transform the Old Man and the sea into an existentialist epic tale ? This profound and deep book offers a different solution to each reader.” (Marcel Brion)