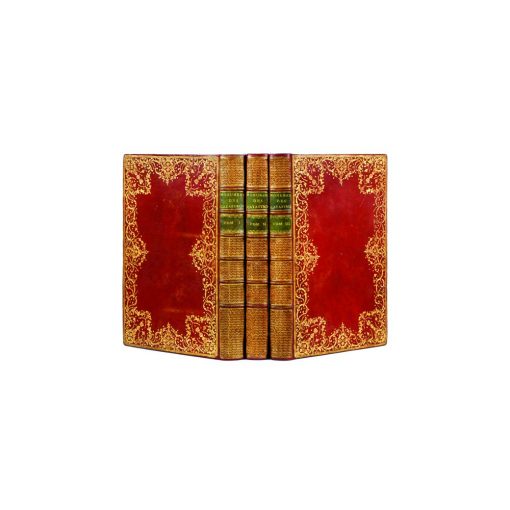 Superb edition containing 293 plates
partly colored by hand at the time, several on a double page.

A very beautiful and precious copy on large paper,
preserved in its beautiful contemporary red morocco binding,
attributable to Derome.

First edition in French “generally more sought-after than the original” (Brunet) of this monumental work.

It contains 293 splendid plates partly colored by hand at the time, several on a double page including on frontispiece.

The table that “is missing in many copies” (Brunet) is here absent, as well as the second part of Part III.

“The second part of Part III which contains the table is often missing.” (Graesse)

However, the copy was bound this way at the time.

“One of the best illustrated and most complete accounts on fossils in that period.” (Landwehr)

“A sought-after text. It is the most complete and best executed of the texts written up till then on this interesting part of natural history.” (Quérard)

The detail and precision of the plates of this monumental work considered to be one of Knorr’s masterpieces have turned it into the standard, rendering zoological classification possible.

The quality of the plate was unanimously celebrated.

Archibald Giekie, one of the founders of geology, says : “It is scarcely possible to exaggerate the beauty and accuracy of the representation of the fossils. Such illustrations had never appeared before, and have scarcely been equaled since.”

“Nuremberg saw between 1755 and 1778 the publication of the greatest work ever to be published in paleontology, the one by G. Wolfgang Knorr. He drew and engraved the plates. The text is the work of J. Ern. Em. Walch.

It is the most considerable work published that century and in many regards, mostly because of the immensity of the research and the sagacity of the views presented, it hasn’t been surpassed by any of those who came after.

The first plate, the frontispiece, is a view of the quarry of Solenhofen, a place already famous for the important fauna it contained. The next plates, all drawn with great care, very accurate and colored, represent dendrites, fossils of invertebrates of all kinds, fish and tertiary and carboniferous plants. The text of the first volume gives a multitude of very instructive details on the different stages of petrification, details that hint at an attentive and judicious observation. The plates of this immense work by Walch and Knorr represent all that was then known on fossils and petrification. It is quite a feat, a complete and faithful expression of the science of the time, a monument that deserves to be read in depth.” (E. J. A. D. Archiac de Saint-Simon, Introduction à l’étude de la paléontologie, I, pp.112-117)

George Wolfgang Knorr was a German engraver born in Nuremberg in 1705. He had first learned to be a wood turner, trade he practiced until he was 18 years old. But having read some good books, he realized he wanted to be an engraver. He even took to painting and painted some landscapes. Later, he discovered natural history books, which he liked and to which he dedicated his talent.

A superb copy, as issued, preserved in its attractive contemporary morocco binding attributable to Derome.