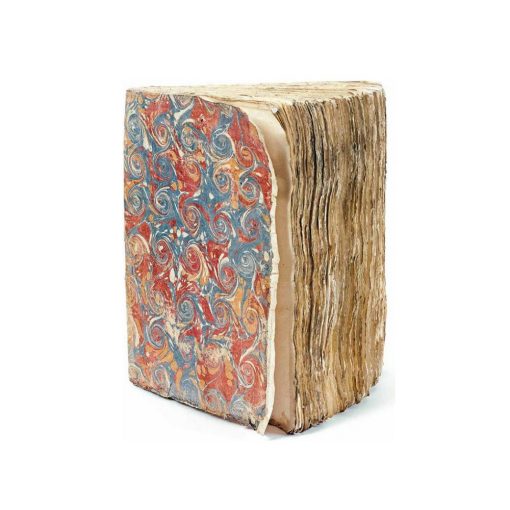 A precious and superb copy, with very wide margins,
preserved in its contemporary wrappers, as issued.

Rare first edition, very complete, including the supplément that was only added to some copies of this “important work” (Quérard) by Le Trosne which will be seized and banned in 1780.

“The only practical work of the Physiocratic school, and its last word. Le Trosne examines the administration of his time with a remarkable precision and without judgement.

This powerful study is the best picture we own of the finances of the Ancien Régime.”(J. Mille)

“A long memoir written in 1775 in which we find positive information on pre-revolution society and ideas analog to those that Turgot, who was a friend, had submitted two years before to Louis XVI, in one of his constitutional projects.

Le Trosne highlights the sinister effects of feudality and demands its complete abolition with much force and reason.” (Ch. Coquelin)

Around 1775, the endlessly increasing difficulties in the perception of the taxes and the insufficient resources furnished brought the public’s attention back to a project that the marquis de Mirabeau had promoted as early as 1750 : create provincial administrations. The academy of Toulouse invited publicists to work on this project and Le Trosne answered with this memoir. His work was published in 1779.

Le Trosne’s tax reform did not really protect the Parisian clergy’s prerogatives; in 1780, there was supposed to be a meeting of the clergy in Paris but the Garde des Sceaux was worried the book would indispose them: to avoid all scandal, he had it seized, even though Necker had favored its publication. This work remains an important source of information on how French society was organized before 1789.

“Esmein had said that the constitutional committee of 1789 had taken Le Trosne’s plan as a model ; in “De l’administration provinciale et de la réforme de l’impôt”, Le Trosne had presented a whole system of elective administrations. His idea was based on the fact that a provincial administration was the only way to interest the Nation in the recovery of the public good.” (Sieyès et sa pensée, P. Bastid)

“The text was banned and seized by order of the Garde des Sceaux in 1780. The author’s tax reform did not really protect the Parisian clergy’s prerogatives; in 1780 there was supposed to be a meeting of the clergy in Paris but the Garde des Sceaux was worried the book would indispose the bishops and archbishops : to avoid all scandal, he had it seized, even though Necker had favored its publication.” (Peignot)

A precious and superb copy, very pure, untrimmed, with very wide margins, and preserved in its contemporary wrappers.

Handwritten corrections on pages 180 and 181.