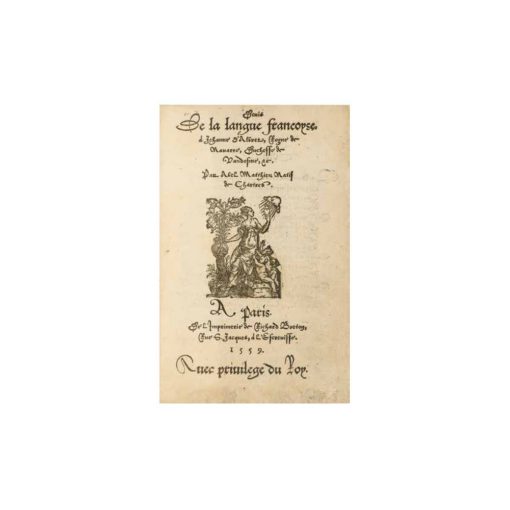 which will influence the Traité de la précellence du langage by Henri Estienne.

“This edition, printed in civilité type, is rare.” (Brunet)

This text contributed to the development of French language in the 16th century and contains advice on grammar and its correct use; it is a sort of “guide of proper language”.

Abel Mathieu offers to “transform Plato and Aristotle into the bourgeois of our towns and dress them not in the Greek fashion but the French one”.

Born in Chartres, Abel Matthieu studied law in Bourges from 1529 to 1534. The classes given by the famous juris-consult André Alciat will influence Matthieu throughout his career. Matthieu tried to give a judicial frame to French language.

Matthieu is “a gallant gentleman who converses about the language” (Livet, 1859 : 271) and defends the “existing spelling”.

“The author is not a grammarian but a gentleman conversing about language for the pleasure of the ladies. He is not a reformer, he is independent. “Our language is ours, he says; the Greeks and Latins have nothing to do with it.”” (Ambroise Firmin-Didot, Observations sur l’orthographe française, p.191)

The publication of the Devis occurs during this period of linguistic reflection that was the 16th century.

Thanks to the printing press and the cultural prestige of France, the French language spread fairly quickly and the grammarians of the time preoccupied themselves with the codification of French and the normalization of the written word. The first glossaries came out.

A defender of the national language against the show-offs and the “Latinizers”, Mathieu includes Clément Marot “in the theater’s best for he is truly a friend of the multitude, he has a sweet and constant temper and a good and facetious spirit.”

An admirer of Marot, Mathieu also considers Ronsard to be a great poet.

The Protestant poets of the 16th century want to promote a simple style in regards to religion. The Word must be heard by all and the Biblical message must therefore be vulgarized. Another reason to this quest for simplicity is of a moral order. The humble style is perceived as a moral quality more than an esthetic one. This ideal of simplicity has been applied to grammar through the process of elaboration of language undertaken in the 16th century. Tory violently criticizes the “rippers of language” and those who “jargonize” and Meigret mocks the “effeminate mignons who delight in etymological formulas”.

In his Devis de la langue françoyse, Mathieu defends a language composed of simple terms, intelligently organized. He suggests a balance between mind and spirit. The author sees a link between one’s capacity to assemble words harmoniously and one’s intelligence, or rather spirit.

But where do these savants and spirited people susceptible of becoming role models lie? That is what Le devis tries to determine and Marot is often cited as an example.

The printer of the Devis, Richard Breton (1524-1571), came from a long line of booksellers and “very active agents of religious propaganda” and had to flee religious persecution. His property was seized in 1562. The printer essentially served the Protestant cause.

The choice of a type called “civilité”, created in 1557 by Robert Granjon, one of the geniuses of Renaissance typography, is not insignificant.

This new type was born out of a properly nationalist reaction, a “modernized resurrection” of ancient gothic font more and more abandoned and replaced by roman and italic types, which can be seen as an attempt to renew the old French letter fallen into disuse and one can see there some of the first signs of a drop in Italian influence.

The will to defend the prestige and originality of the French language is underlined by the adoption of a special written form, more modern and legible.

The majority of the printing in civilité type transported new, Erasmusian, or even Lutheran opinions.

A precious copy of this rare first edition printed in civilité type, preserved in its fine blue morocco binding created by Thibaron-Echaubard.

Only 3 copies present in the international and national institutions: Bibliothèque Mazarine, Bnf and Universitatsbibliothek LMU Munchen.

No copy has been recorded on the market since the beginning of the surveys, more than 60 years ago (ABPC).