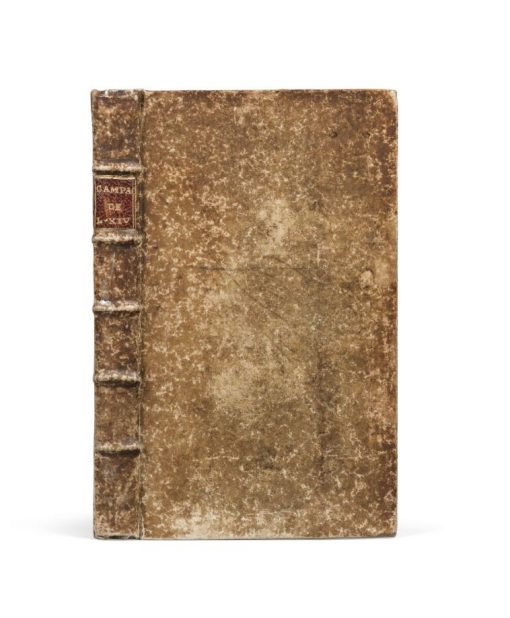 Only 1 other copy has appeared on the market in more than 35 years,
it was bound in 19th century morocco.
Paris, 1730.

“La Campagne de Louis XIV, despite the title’s attribution, is the work of Jean Racine and Boileau. La Comparaison would seem to be by Varillas.” (Guibert)

“Some people in the know assure the Campagne de Louis XIV was written by Racine and Boileau. It was reprinted in 1784 under their name, based on a manuscript from the library of Valincourt, gotten from Boileau and entrusted to the abbot Vatry.” (Quérard, III, 1034)

In his marriage contract, Racine is said to be an advisor to the king and treasurer of France and, in May 1677, he is appointed as the king’s historiographer with Boileau.

Louis XIV asks them to drop everything and dedicate themselves to the account of his life. Due to this charge, Racine must stay at court, where he shines because of his noble attitude, his elegant word, his delicate ways.

On return from his first short and glorious campaign, the king tells them: “I am upset that you did not come with me; you would have seen the war and your trip would not have been too long. Your Majesty, answered Racine, did not even give us time to have our clothes made.”

As a historiographer, he had written a Histoire du règne de Louis XIV that was almost done when he died; it was destroyed during a fire (1726) ; only one fragment survived, the Campagne from 1672 to 1678.

This text is a praise addressed to Louis XIV. Close to the king, a member of court, the author exposes in detail Louis XIV’s conquests.

Because Racine mostly drew inspiration from Ancient Greece for his works, he was considered a conservative writer, on the side of the “Anciens”.

However, this work from Racine is more complex. In between the praises addressed by the author to the king, one can read some criticism made by the author in regards to Louis XIV’s reign.

As a reminder, Britannicus, a historic character tableau of Nero’s court, had had a strong impression on Louis XIV who had understood it to be a negative review of his conduct.

At the time, “all political debate is censored and all history of civil wars must be written under cover. Racine’s work embodies a traditional criticism of the tyranny present in the author’s tragedies”.

Blending tradition and modernity, the Campagne de Louis XIV, a precious testimony praising the king’s facts of war, also testifies of the interest and the interrogations of the author for the people whose miserable conditions only increased as Louis XIV’s reign drew to a close.

An attractive copy preserved in its contemporary mottled vellum binding.

Provenance : Library of A. Perreau, with ex-libris.

Only five copies are listed in the international and national institutions: 4 at the BnF and 1 at the Danish National Bibliothek.

A copy of infinite rarity: only 1 copy has appeared on the market in more than 35 years, and it was bound in 19th century morocco.