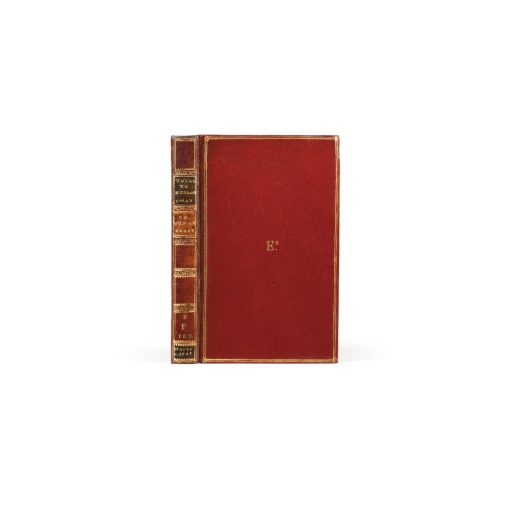 Famous first edition of Henri Ellis’ voyage
from 1746 to 1747
to find a shorter passage to the East Indies.

A precious copy bound in red morocco
by the great Parisian bookseller Anguerrand
for the Chancellor and president de Lamoignon (1735-1789).

Ellis, Henri. A Voyage to Hudson’s Bay, by the Dobbs Galley and California, In the Years 1746 and 1747, For Discovering a North West Passage… with the Countries adjacent.
London, H. Whitridge, 1748.

It includes a folding map and 9 plates, most of them folding.

“The first part contains a history of English voyages to discover the north-west passage and the rise of the Hudson’s Bay Company. The second describes an expedition under Captain Moor and Captain Smith financed by private subscription (notably by Arthur Dobbs), on which Ellis was hydrographer, surveyor and mineralogist. The expedition was instigated by the North-West Committee, a body of Dobbs’s supporters, in the years following Captain Middleton’s abortive attempt to find a passage, and the subsequent acrimonious dispute between Dobbs and Middleton described here as “long and warm” (p. 99).

This voyage proved, finally, the non-existence of a north-west passage from Hudson’s Bay, though the third part contains arguments in favour of a passage, and concludes with « where it might be expected » (pp. 327-333). The work contains valuable information on the customs of the Eskimos, until then little known.”

“A valuable performance, containing many curious and sensible observations. (Lowndes)

“The most important result of this voyage was that it definitely put an end to the idea that the N.W. Passage lay through Hudson’s Bay. Ellis’ work, although containing many valuable observations on tides, on the vagaries of the compass, and on the customs of the Eskimos, a people then practically unknown, mingles a great deal of speculation on the certain existence of the passage, on magnetism, on fogs, on rust, and other matters.” (Maggs, Bibl. Americana, part V, p. 470)

Henri Ellis served in the Navy. He took part in an expedition that was to look for a north-west passage in the Hudson Bay. He was appointed committee agent. His particular instructions were to write down everything in terms of geography, nautical art and natural history. The expedition was made up of the Dobbs, commandeered by captain G. Moore, and the California, by captain Smith. They left Gravesend on 24 May. On 27 June, at 58° 30′ of boreal latitude, they saw floating ice cubes; soon, they were in the middle of heavy fog and they saw huge masses of ice and floating wood. On July 8th, they came upon the islands of the Resolution, at the entrance of the narrow Hudson. On the Welcome coast, Ellis found Cape Fry. He published in English the account of his journey (the present volume) ; this account was badly translated into French, German, Dutch… There are excerpts of Ellis’ account in parts 14 and 15 of the General History of travel and in some collections. Ellis’ book starts with a summary of all the previous attempts made up until 1746 to find the North-West passage.

Pierre Anguerrand became master in 1726, guard of the Community in 1748. Appointed Bounder of the king in 1746 as a replacement to Du Seuil, he stayed in office until 1767. He was one of the favorite bounders of the famous bibliophile president Lamoignon (1735-1789), président du Parlement de Paris, and later minister of Justice and knight of the Order of the Holy-Spirit.

The library founded by Guillaume de La Moignon was enlarged with the entirety of the Berryer cabinet, his father-in-law, a former minister of Justice who died in 1762. Monsieur de La Moignon, who was also struck with this hereditary passion for books, had very good taste and was knowledgeable. Before reuniting his father-in-law’s cabinet with his illustrious ancestors’, he proceeded to rigorously examine the catalogue of the Guillaume de La Moignon collection, whose librarian was the scientist Baillet. The analytical catalogue of this collection listed 35 folio manuscripts. Through this process, some common editions and other books that later better editions rendered pointless were eliminated. When both collections were reunited, each supporting the other, La Moignon, after many costly transcriptions, decided to have this new catalogue printed for his personal use. This catalogue was published under the title: Catalogue des livres imprimés et manuscrits de la bibliothèque du président de La Moignon (par L.-Fr. de La Tour), with a table of authors and anonymous, Paris, 1770, 8vo. The most beautiful books from this collection were sold in bulk to English booksellers, as was the case for the present volume.