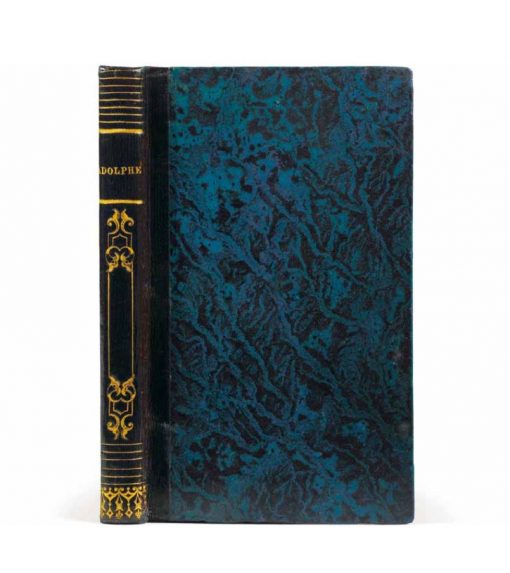 “Benjamin got around to writing a novel,

it is the most original and touching I have ever read”

Clouzot mentions three editions published on the same date, in 1816, all 12mo :
“The London one, London Colburn. Paris, Trottel and Wurtz, 1816 ; The Paris one : Paris, Treuttel and Wurtz ; London, Colburn 1816 ; and London, Colburn, Paris, Treuttel and Wurtz, 1816.
Which of these editions, published within a few days of one another, is the first one has not been established yet. All three are rare and very sought-after. The books were at the time most often soberly bound.”

Benjamin Constant goes to London and decides to publish at the same time, in London and Paris, this novel written in Geneva in 1806, in the midst of the author’s stormy and tumultuous passion for Germaine de Staël.

In this partly autobiographical novel, a masterpiece of self-analysis, Benjamin Constant serves as the spectator to himself and personifies with talent the romantic hero, the symbol of the century’s woes.

“In 1816, Benjamin Constant published his novel Adolphe, to much success. It is a colorful and acute description of himself on an emotional level. It is impossible to read this well-written autopsy without being profoundly moved. But what was really a sight to see was Constant himself reading his Adolphe with gripping emotion, his face full of tears.” (Prosper de Barante, Souvenirs, II, pp. 314-315)

This brief and dense novel made the author lastingly famous.

A copy preserved in its elegant contemporary binding.

Provenance : libraries of René Collet and Georges Collet, with ex-libris.