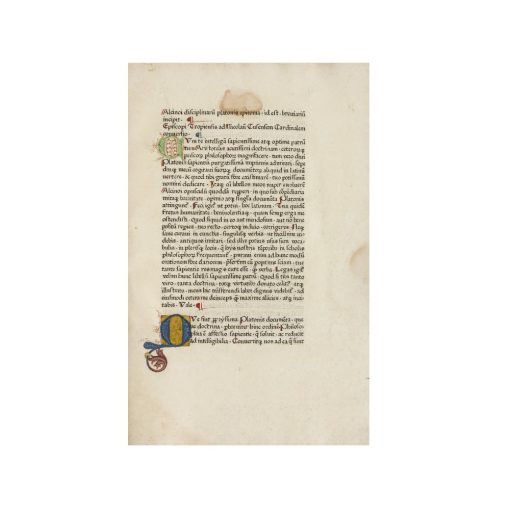 A superb and precious copy, with huge margins,
ink rubricated initials
and the first two letters illuminated, the first one being enhanced in gilt.

Brown calf, double frame of blind-stamped fillets on the covers, ribbed spine decorated with blind-stamped fleurons and fillets, title in gilt, decorated leading edges, inner gilt roll-stamp, some marginal foxing on the first two leaves. Binding from the middle of the 19th century.

It is the only one mentioned by Goff.

A superb and precious copy with rubricated initials in red ink and the first two letters illuminated, the first one being enhanced in gilt.

“First very rare edition, printed on long lines, with no distinction of chapter or sections and without numbers, signatures or catchwords. The totality of this volume is of 22 printed leaves: at the beginning, there is a dedication epistle by the bishop of Tropea (Petrus Balbus Pisanus), author of this Latin version of Alcinous, to the cardinal Nic. De Cusa ; then comes the text, at the end of which we can read this subscription: Epitoma Alcinoi in disciplinaru Platonis definit. Anno salutis. M. CCCC. LXXII. Die vero XXIIII. Mensis Novebris.” (Santander, who lists this edition as being the first)

Antoine Koburger (1443-1515), a German editor, bookseller and one of the most distinguished and active printers of the 15th century, was renowned for the “Chroniques de Nuremberg” he published in 1493.‎

Alcinous was popular in the 1st century CE.

A student of the school of Alexandria and faithful to its spirit, he was one of the first to start blending into Plato’s doctrine Aristotle’s opinions and some oriental ideas.

There is sufficient proof of that in his Introduction à la philosophie de Platon, a digest where he largely exposes this vast system, while adding some foreign elements to it. For example, when he speaks of spirits and demons, he seems to know a lot more than Plato: to him, some are visible and some invisible; he distributes them among all of the elements and tells us about their relationships, their influence — before our eyes a complete demonology is born, from which the only next step possible is towards magic.” (Dictionnaire des Sciences philosophiques, pp.48-49)

We know of Plato and some of his texts; but there are only a few who have an accurate and precise idea of the whole philosophical system of the prince of philosophers.

Presenting to amateurs of philosophy a summarized tableau of what Platonism is was doing them a great favor.

This is what the Platonist philosopher Alcinous undertook and executed in this book that we can consider like a lost pearl in the dust of the centuries.

How intriguing it is to find gathered in a miniature frame a philosophical system that for so long sat at the highest level of the opinion, especially nowadays when this kind of curiosity is hard to satisfy: for it is difficult to have in one’s possession the complete works of Plato.

Plato’s texts are numerous and quite diverse but there is no order that links the different treaties between them. This reduced map of Platonism must be considered very precious, as it gives the mind the ability to grasp this vast ensemble at first glance. (J. J. Combes-Dounous)

This translation of Alcinous’ text is due to the talent of Pietro Balbus.

A superb and precious copy of this very rare incunabula edition, with very wide margins (height: 315 mm), rubricated initials in red ink with the first two letters illuminated, the first one being enhanced in gilt.

The copy mentioned by BMC was only 303 mm high.