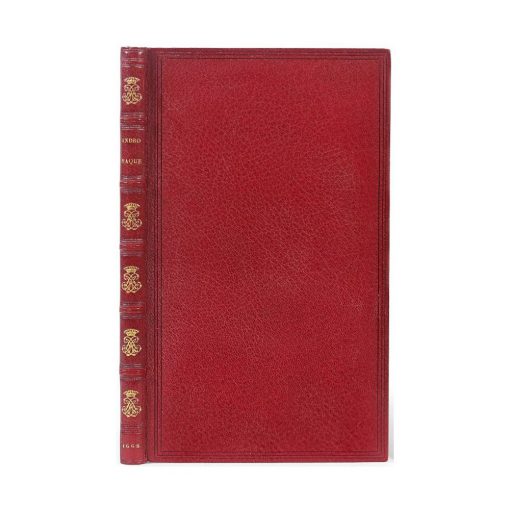 First edition of Andromaque, “one of Racine’s masterpieces”
performed in front of the king and the queen on November 17th 1667.

A copy preserved in its elegant red morocco binding
created by Tautz-Bauzonnet, with the cipher of the comte de Lurde.

Andromaque was performed for the first time on November 17th in the queen’s apartments by the actors of the Hôtel de Bourgogne. King Louis XIV was present.

Andromaque represents a decisive turn in Racine’s career. It is his third play and his first triumph. The court applauded him with enthusiasm and the Parisian audiences let their admiration be heard.

The original aspects of Andromaque were vividly felt and the play met with considerable success: the public marveled at the simplicity of the action and the comparison was quickly drawn between the new dramatic concept implied by the play and the Cornelian concept of the tragedy: passionate love was making an entrance on the French theatrical scene.

“It is with Andromaque that Racinian tragedy is truly born. That, beyond Alexandre, it constitutes a return to the myth is the least of its characteristics.” (Dictionnaire des Oeuvres, Laffont-Bompiani)

“A critique of Andromaque was made in the form of a comedy titled La Folle querelle ou La Critique d’Andromaque by Subligny in which Pyrrhus was accused of brutality and being a dishonest man because he came back on his word to Hermione”, underlines Brossette.

L’Andromaque is the first play of which a critical comedy was written.

In the first edition that Racine gave of Andromaque, he inserted a preface addressing the criticisms of his character Pyrrhus.

In 1673, Racine changed the ending of the play.

“Was there ever a topic better chosen, better deployed and as generally applauded than this one, observes the author of the Dictionnaire Dramatique. However, was there ever a play more attacked, criticized, torn apart, and with such furor and tenacity? Despite the jealousy, the maliciousness and the cabbala, Andromaque prevailed.” (J. B. Baudrais, Petite bibliothèque des théâtres, XXVIII)

There was an Andromaque quarrel just like there was a quarrel about Le Cid.

“An admirable play whose vice is disguised by the charm of its perfect poetry and the happiest use that was ever made of French language.” (Voltaire)

Our copy, mentioned by Tchemerzine, comes from the B issue described by Picot and Tchemerzine :

It accurately bears “on the title a fruit and flower basket resting on the head of an angel; at the foot of the a3l. recto on reads: “vous ne pos-”, and on the foot of a4 l. recto: “Mais Madame” ; page 71 is numbered correctly.”

The distinction between issues 2 and 3 lies in the preliminary leaves.

In the second issue, these leaves are strictly the same than the ones from the first, whereas in the third they were reprinted, thus creating some differences.

In reality, one can see that there aren’t three different issues but 3 versions of 2 issues.” (Guibert)

A beautiful copy of this rare and sought-after first edition of Racine finely bound in red morocco by Trautz-Bauzonnet with the cipher of the Comte de Lurde.

Provenance : Library of the Comte de Lurde and Ruble (cipher and ex-libris).