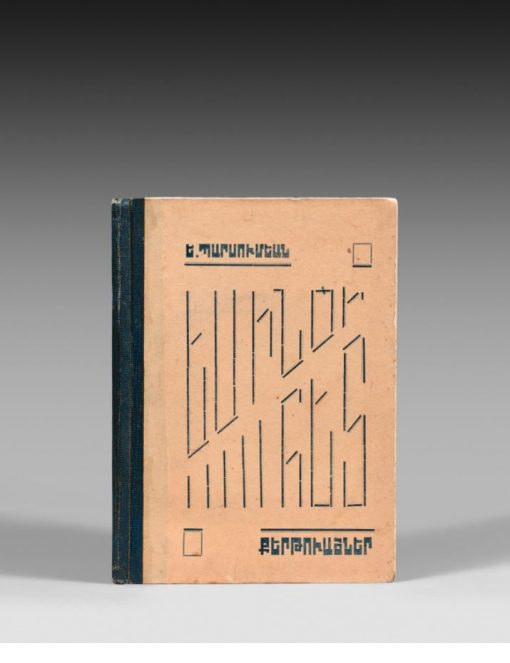 A beautiful and moving copy signed by the author and preserved in its original publisher’s boards.

First edition of this very rare collection of poems.

Precious copy with an added dedication signed by the author.

Original Armenian poetry published in Aleppo and Latakia with a striking proto art deco cover.
Signed by the author.

An extremely rare collection of poetry by an Armenian author Yervant Barsoumian (1910-1977) was printed in Aleppo and was published by the author in Latakia, Syria.

Barsoumian, who was working as an engineer for the Régie des Tabacs at the time, designed the book in a stunning proto art deco style himself.

Only two series of poetry appear to be known by the author.

Since the first third of the 19th century, Armenia and Armenians are split amongst three empires, Ottoman, Russian and Persian. The Armenian question becomes international at the Berlin Congress of 1878. Rising demands and the birth of an Armenian revolutionary movement explain the repression of the Hamidian state. The massacres of 1894-1896, followed by those in Adana in 1909, convince the Ottoman Armenians to flee to the Caucasus, Lebanon, Egypt, Bulgaria, France and the United States. The deportations and massive killings organized by the government of the Young Turks in the spring of 1915 cause the extermination of more than half of the Armenians in the Ottoman Empire and the forced exile of those who survived. It is doubtless a genocide even though the term doesn’t exist until 1944 and was not defined by the UN until 1948.

It’s in the midst of the woes of the Russian revolution and the last throes of the First World War that the foundation for a tiny independent Armenian republic are laid (28th of May, 1918). Structured around its capital, Erevan, Armenia is officially recognized at the peace conference.

The genocide of 1915 is an unprecedented catastrophe in the history of the Armenian people.

Signed copy by the author, preserved in its elegant publisher’s binding, as published.

The book is very rare.The central register of Armenian libraries records the book with no registered examples.
No copy listed in Worldcat.