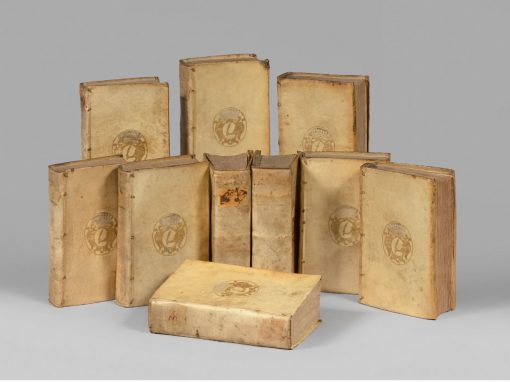 One of the most precious known copies of the Grand Cyrus

Ivory vellum, arms stamped in gilt in center of the covers, central crown scratched during the Revolution, lettering piece in red morocco added and glued in the 18th century and removed in the 20th century.
Contemporary armorial binding.

The most precious edition of the Grand Cyrus, the only one where the 10 volumes are all dated from 1654 without mention of edition. It remained unknown to all of the biographers: Deschamps mentions only one edition dated both from 1653 and 1654.

Tchemerzine describes a first edition whose volumes spread from 1650 to 1656 with the parts 1 to 5 bearing “second edition”. He describes three posterior editions “but they contain books all with different dates”.

This masterpiece by the illustrious “précieuse” Madeleine de Scudery (1608-1701) was extremely popular during the second half of the 17th century and was translated into English, German, Italian, Spanish and even Arab.

It owed its fortune to its romanesque and sentimental character and to the fact that its heroes could be linked to famous people from the time. Mlle de Scudéry was one of the most illustrious “précieuses” ; on her famous Saturdays, she hosted all of the most beautiful minds of the court and the city. She undertook, with her brother Georges, a series of novels inspired by history, the Rome of the kings for Clélie, where lies the famous “Tenderness card”, or Ancient Persia for Le Grand Cyrus.

Le Grand Cyrus is a roman à clef and Victor Cousin, who studied French society at the beginning of the 17th century, found most of the people involved: the Grand Cyrus is the Grand Condé, Mandane is the la duchesse de Longueville, Philonide, Julie d’Angennes. Mlle de Scudery is herself present under the name Sapho. The characters are finely drawn. The traits had to be both exact and measured since the real individuals recognized themselves and were quite satisfied with their portraits.

When it was published, this collection of famous conversations became a manual of good society.

What is truly feminine about this book is how precious love is portrayed. For an entire generation, Le Cyrus was the manual of perfect love. All of the hôtel de Rambouillet recognized themselves in Cyrus.

Mademoiselle de Scudéry’s fame was not contained to her own country; the queen Christina honored her with her friendship, letters and donations; the academy of the Ricovrati in Padua admitted her into its ranks.

The most celebrated day of the gallant annals was Saturday Decembre 20th 1653. Conrart had given Mademoiselle de Scudéry a crystal seal, accompanied by a madrigal. Sapho answered with these verses:

This poem was received with great enthusiasm by those present: Pellisson, Sarrasin, Conrart, Mademoiselle Arragonais, Madame d’Aligre, they all improvised a madrigal. To which other madrigals answered, more gallant from one to the next, and the evening came to be known as the “Day of the madrigals”.

With Le Grand Cyrus, Madeleine de Scudery inaugurated in French literature the psychological novel, that would be one of our most authentic glories.

A copy of unknown condition for Tchemerzine including all of the volumes at the same date and bound in contemporary armorial vellum, coming from Louis-François Vireau des Espoisses, seigneur de Villeflix, who was maître de la chambre aux deniers du roi. (Olivier Pl. 1362)