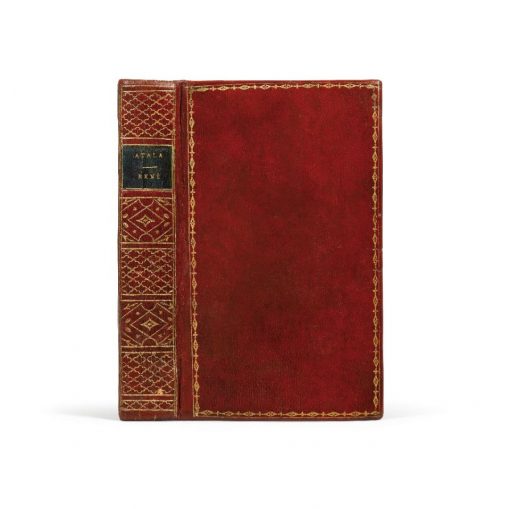 It includes 4 decorative figures in Atala and 2 in René, engraved by Saint Aubin and Choffard.

It is in this edition that is published the “definitive text carefully reviewed by Chateaubriand.” (Carteret)

“René was an immense success on publication, especially with the younger generation. The influence of René was immense, not only on works published shortly after, like Obermann by Sénancour, Adolphe by Benjamin Constant, Edouard by Madame de Duras, but also, and mostly, on the great romantic writers : Musset’s Les Nuits and Confession d’un enfant du siècle are directly inspired by René ; Vigny, in some of the pieces from the Destinées ; a large number of Hugo’s characters are also descendants of René… and finally we must also mention Le Rouge et le Noir and especially Armance by Stendhal.

“The role Chateaubriand played in the birth of this form of romantic melancholy that would invade literature for several decades is considerable ; we can compare it to Goethe’s and Byron’s, but it surpasses them, at least in France.” (Dictionnaire des Œuvres)

“Atala deserved the success it received in the romantic literature that Chateaubriand greatly influenced. In his youth, the author had the idea of describing the mores of savages while framing them in a historical narrative. The massacre of the rebel Natchez tribe committed by the French in Louisiana in 1727 seemed to him to be a good topic. On returning from his famous trip to America, he made the dreams of his youth come true with Atala. This “anecdote written in the deserts and in the huts of savages” reveals a great love of nature and the sentimental depth that would make the author so famous amongst Romantics. » (Dictionnaire des Œuvres)

“Atala et René were considered for a long time to be the author’s most representative works, especially René, whose part autobiographical nature is obvious. It would go on to profoundly impress the future Romantics.” (En français dans le texte, n°206)

A precious and very beautiful copy printed on Dutch paper, one of the few preserved in its first contemporary morocco binding.