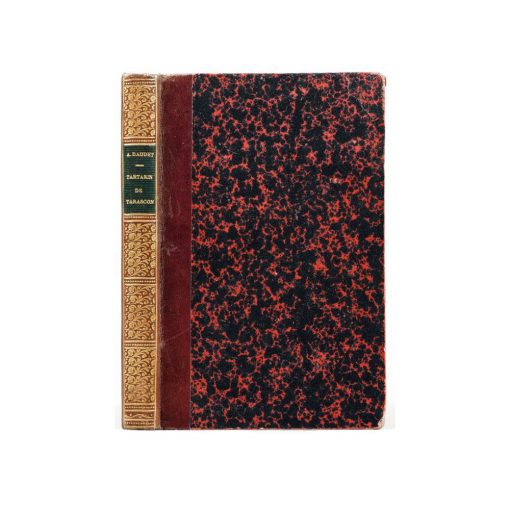 First edition of this “capital work by Daudet
of which no large paper was printed” (Carteret),
“very rare and very sought-after” (Clouzot)

A very attractive copy,
preserved in its fine contemporary binding,
in a rare and sought-after condition.

“A capital work by Daudet of which no large paper were printed.” (Carteret)

“It is the author’s most famous novel. The author here creates a unique character, the vain and pretentious man from the South of France, a compulsive liar by way of his excessive fantasy, ready to throw himself, in his imagination, into the craziest adventures but in reality sticking to his very prosaic good sense ; this character, now legendary, symbolizes in an obviously very clichéd way the personality of the people of Provence, good people whose brains are in a perpetual state of turmoil because of the fierce sunshine, and for whom even the wildest tales are common currency. Tartarin is a small bourgeois from Tarascon, robust, full of fire, with a certain tendency towards obesity ; he lives quietly in his small house full of exotic weapons, in the middle of a garden where a famous baobab grows (it doesn’t measure more than a meter), enjoys Fenimore Cooper and dreams of the most extraordinary adventures that could happen on land or sea. His considerable reputation is based on tales more or less invented. Until one day, he finally makes a decision : like all of the inhabitants of Tarascon he is a good hunter and will go lion hunting in Africa…

Full of life, animated from one end to the other by the most joyous fantasy and a shining style, this book hides, under burlesque appearances, the love that Daudet felt for Provence and its inhabitants.” (Dictionnaire des Œuvres)

A very attractive copy of this rare literary first edition, preserved in its fine contemporary binding, in a rare and sought-after condition.