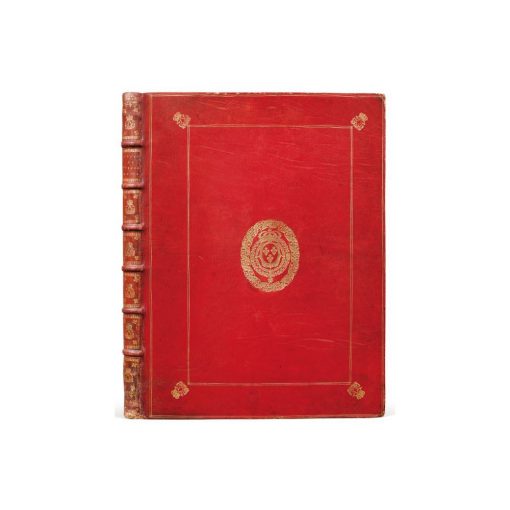 A superb copy, complete with its 34 etchings
measuring for the most part 1350 x 325 mm,
and preserved in its contemporary morocco with the arms of Louis XIV.

First edition and first issue of the most beautiful collection of engravings of the 17th century, printed on Louis XIV’s order.

It is made up of 34 very beautiful etchings very representative of Louis XIV’s reign.

They evoke the life at the courts of Vincennes, Versailles and Fontainebleau, and then the campaign of Flanders.

They all present real artistic qualities and are staged, in front of architectural backgrounds, with groups of individuals or riders represented in a very life-like manner.

“A student of Peter Snayers, Van der Meulen learned from him how to draw horses and also the light and transparent technique of the Rubens school.

He was charged with making the models for the tapestries representing Louis XIV’s exploits and he accompanied the king in all of this travels and wars.

His paintings faithfully represent the composition of the troops and also some of the costumes of some individuals, making this a precious historical document.

When he accompanied the king in his campaign of Flanders in 1667, Franche-Comté in 1668 and Holland in 1672, he took every day orders from the king regarding which episodes the king wanted to see represented. He drew the camps, the location of the armies and sieges according to what he saw. His paintings of the armies on duty are perfect.” (Benezit, VII, 366-367)

The collection is organized as such:

It opens with 5 beautiful etchings representing Louis XIV and the court in Paris or the castles of Vincennes, Versailles and Fontainebleau :

29 superb etchings are then dedicated to the campaigns of Flanders and Franche-Comté.

A superb volume, preserved in its sparkling red morocco binding with the arms and crowned cipher of Louis XIV.