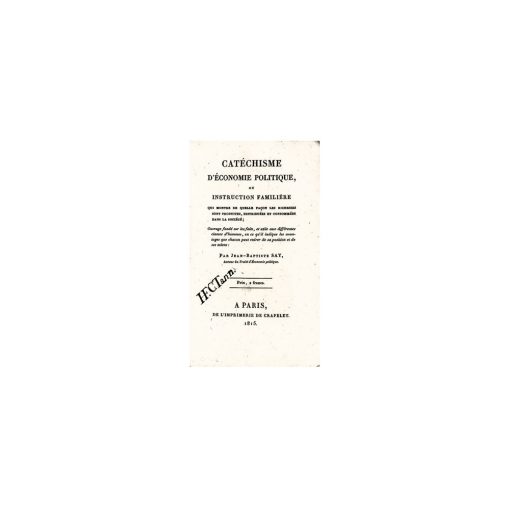 Rare first edition of the Catéchisme d’économie politique by Say,
written in order to make political economy accessible to all.

Rare first edition printed at the author’s expense of this text meant to make political economy accessible to all.

“Born in Lyon in a Protestant merchant family, Jean-Baptiste Say (1767-1832) studied business in England, discovered The Wealth of Nations by Adam Smith and converted to economical sciences, of which he was one of the “founders” and one of its most efficient propagators, not only with the different governments but also with all the key players. In 1817, his Catéchisme d’économie politique is meant to largely spread this new knowledge. An independent spirit, generous and optimistic, Say delivered a synthesis of classic political doctrines (mercantilists, physiocrats and Adam Smith) on which he built on. In an essentially liberal economic frame, he organized the elements of economy by concentrating his analysis on production. He had the idea of the “law of the markets” or “Say’s law”. The popularity of the concept of production and the law of the markets has ensured Say’s celebrity in France and around the world.” (En Français dans le texte)

Jean-Baptiste Say was deeply convinced that the science of political economy would only be useful to the nations when its principles would be familiar to most citizens. He believed it would have very limited effects if it remained within the sphere of a small number of adepts.

This is why he tried to summarize his ideas in a small number of pages so as to be available to the less-fortunate. In 1815, he published his Catéchisme d’économie politique, which had several editions and was translated into most European languages.

Jean-Baptiste Say vulgarized Smith’s doctrine but also gave it a very French feel. He also terminated the expired ideas of the Physiocrats, which were still circulating.

An enemy of all forms of intervention, Say’s anti-government position clearly appears in his ideas.

His theoretical and descriptive concept of political economy influenced the French school of economics for a long time.

An attractive copy, with wide margins, entirely untrimmed, preserved in its contemporary relay wrappers, as issued.

This German bibliophile collected important works of literature and economy preserved in their contemporary bindings.