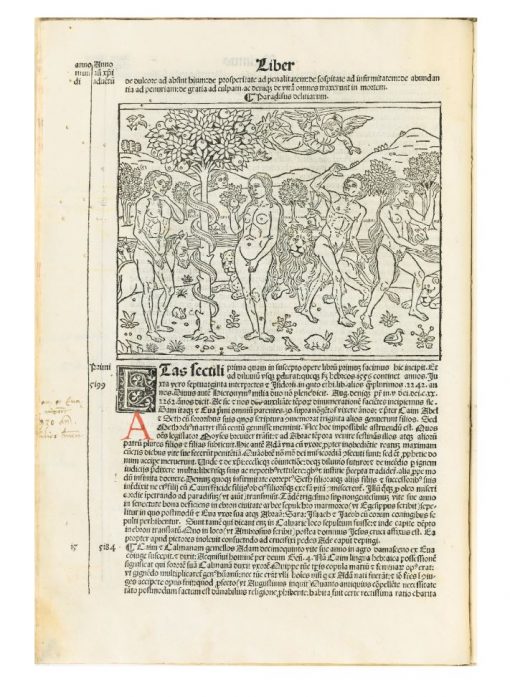 An illustrated Chronique de Bergame,
printed in Venice in 1490.

La tentation and La mort d’Abel stand out because of their fine lines, the expression in the eyes and the presence of animals that seem to give them life.

One of the most surprising illustrations of the city of Venice is the one where the two columns from the Piazetta are placed to the right of the Doge palace and not to the left which is how they are seen on the laguna.

This book garnered such unprecedented success that it served as a model to Schedel for his Chronique de Nuremberg, printed seven years later.

One passage is dedicated to the invention of printing (year 1485, f.282 verso) attributed to Gutenberg, Fust or Jenson.

The chapter concerning the discovery of America by Christopher Columbus, marking this book as one of the earliest americanas, was printed in a later edition in 1503.

Oloschki considers this book « one of the first illustrated books to come out of the Venice print shops » (Le livre illustré au XVe siècle, 1926).

Beautiful copy containing a few wormholes; the woodcut of The Creation was previously colored.