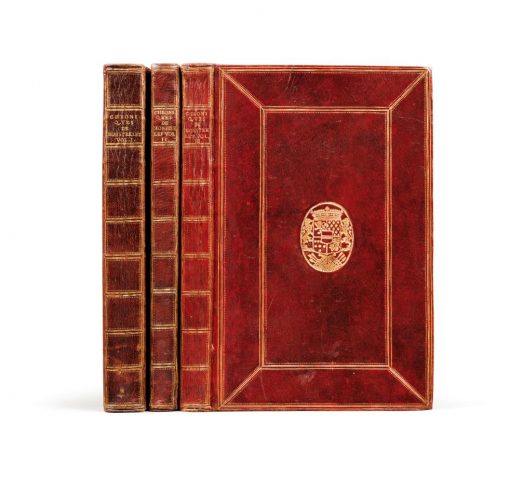 “Monstrelet’s Chronique is an important testimony

for the history of the first half of the 15th century”

A very beautiful and precious copy preserved in its contemporary morocco binding with the arms of Sully (1559-1641),
the famous surintendant des finances and personal friend of Henri IV.

One of the most beautiful and rare editions of Monstrelet’s Chroniques.

Rare and sought-after, it was unknown to Brunet.

“The most complete edition of the Chroniques by Monstrelet is the one from 1603 given by Duchesne.

“Monstrelet is thought to have written his history for the house of Luxembourg ; he declares having worked on the compilation of his book “in the noble city of Cambray, city located in the German empire”.

The most consciencious of his editors, M. Douet d’Arcq, judged his work in these terms: “In this tradition of old French chronicles, which start with Villehardouin and end with Philippe de Commines, Monstrelet will always have an important place. He took care to collect and include in his Chronique numerous very instructive pieces and his account is, in terms of content, the surest guide for those who want to penetrate in detail the complicated facts that make up the first half of the 15th century.”

These facts are none other than the events of the civil wars between the house of Orléans and Bourgogne, the occupation of Paris and of Normandy by the English, their expulsion from French territory…

Monstrelet does not hide his attachment to the ducs de Bourgogne whom he followed at the siege of Compiègne in 1430.

Monstrelet’s Chronique was read and followed by the président Hénault, and put to profit by the historians of the modern school. Already, publicists like Bayle, Moréri, Duverdier, Sorel, Lenglet-Dufresnoy had lauded the accuracy of the dates, the clarity of the facts and the simplicity of his style. Our modern historians mostly appreciate the infinite number of evidence, precious documents that Monstrelet took care to collect and preserve.

“Monstrelet’s Chronique is an important testimony for the history of the first half of the 15th century. It is an original account, where the author intelligently blends written sources and oral testimonies. He confronts the different information, checks them and adds some personal experience.” (Gillette Tyl-Labory)

A very beautiful and precious copy, preserved in its contemporary red morocco binding with the arms of Sully (1559-1641).

A Protestant, Maximilien Ier de Béthune, duc de Sully, baron, and later marquis de Rosny (1559-1641), first served in the army of Henri de Bourbon, king of Navarre, who appointed him advisor of Navarre and chambellan ordinaire. Henri IV, whom he had served with his sword for a long time, appointed him successively conseiller d’Etat et des finances in 1594, surintendant des bâtiments et fortifications, chambellan, grand voyer de France in 1597, surintendant des finances in 1598, grand maître de l’artillerie in 1599, gouverneur de la Bastille in 1602, ambassadeur en Angleterre et gouverneur du Poitou in 1603. Sully, who played a positive role in the reorganization of the finances and in the development of agriculture, was aware of everything, whether it be internal or external matters and affairs and most often even of Henri IV’s personal life, seeing as he was a personal friend; when the king died, he lost his political influence and resigned from the surintendance des finances et du gouvernement de la Bastille in 1611 ; but even though he was retired, he was sought after for his great political experience from time to time and Louis XIII made him maréchal de France in 1634. He died on 22 December 1641, leaving in his Memoires an important testimony of the history of Henri IV. (O. Hermal, pl.441)