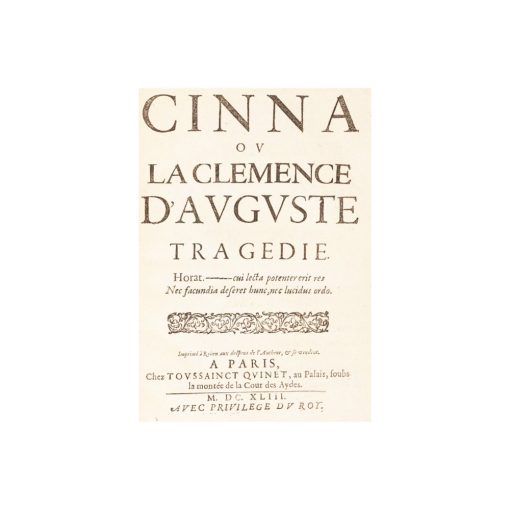 First edition of one of Corneille’s masterpieces.

“With Cinna, Corneille has finally obtained the double approval that he was missing since the quarrel du Cid”

Rare first edition of one of Corneille’s masterpieces, « considered for a long time to be the author’s greatest play ». (Georges Forestier)

It is decorated with a beautiful engraved frontispiece dated in 1643 and representing the conjurors appealing to August’s clemency.

“Cinna is favorably met by the public as well as by the critics. To get an idea of the repercussions of the play, one only needs to read the letter that Guez de Balzac, a real authority in the world of the humanities, wrote to Corneille on 17 January 1643 : “Your Cinna heals the sick, makes paralyzed people applaud with two hands and gives speech back to the dumb.”” (F. Wolf)

Cinna is a political tragedy. Of all the plays of Corneille, it is the one that made the most noise after Le Cid. Its success was extraordinary. The preference generally granted this play over all the others of Corneille’s masterpieces can not only be explained by the beauty of the play, which almost achieves stylistic perfection. The contemporaries saw in it an allusion to the rebellious spirit of the times : it talked about the better forms of government ; the glory attached to the conspirators’ courage could only please them ; they sympathized with them…

With Cinna starts what will define most of Corneille’s tragedies. Whereas love triumphed in the Cid and struggled in Horace, in Cinna, it retreats to the background, it is “subordinated to the great interest of the State, or some more noble and male passion than love, such as ambition or vengeance.” (Discours du poème dramatique)

After Cinna, Corneille was undoubtedly considered the greatest dramatic poet.

This is what Boileau expresses in his seventh epistle with the following verses :

“Cinna, wrote a contemporary in September 1642, “is admired by all : it is the most beautiful play ever given in France, it pleases both the scholars and the general public, it is as beautiful as Seneca’s.” One must underline the importance of the mention “scholars and the general public” : with Cinna, Corneille has finally obtained the double approval that he was missing since the quarrel du Cid. Cinna was for a long time considered to be the author’s greatest play.” (G. Forestier, Dictionnaire des Œuvres)