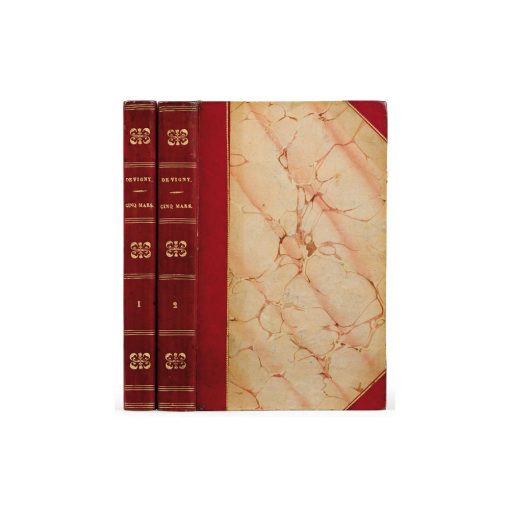 A precious copy preserved in its attractive contemporary binding.

Red half-calf with corners, dotted fillets in gilt on the covers, flat spine with fillets and fleurons in gilt, sprinkled edges, some foxing. Contemporary binding.

“Cinq-Mars” is really the first French historical novel in the manner of Walter Scott.

The novel takes place in the 17th century and at the court of Louis XIII. It relates the story of the marquis de Cinq-Mars who managed to win the king’s esteem by organizing an opposition movement to the cardinal de Richelieu. However, the different manipulations, conspiracies and betrayals finally bring the king to abandon his champion and allow Richelieu to triumph.

By choosing this historical episode and magnifying the person of Cinq-Mars, Vigny deliberately chose his side in favor of an aristocracy that stayed loyal to chivalric ideals.

He sought to express in this text one of his dearest ideas: the defense of the old nobility sacrificed by Richelieu for an absolute and combined monarchy.

In “Journal d’un poète”, Alfred de Vigny thus describes the genesis of “Cinq-Mars” : “After having read the Cardinal de Retz’s Mémoires, came to me the idea of writing the story of the Fronde. I was fourteen years old, it was terrible, probably, and I tore it apart but the facts from that time stayed in my memory… Upon writing Cinq-Mars and portraying the abbot de Gondi, I had the impression of repaying an old debt to a friend… and in 1824 in Oloron in the Pyrénées, I composed and wrote on a piece of paper the entire outline of Cinq-Mars. There is no work I meditated longer and more seriously… It was only in 1826 that I wrote the book from beginning to end and, as they say, with the same ink.” (Œuvres d’Alfred de Vigny, Pléiade, II, 1948, pp. 1063 et 1087)

Victor Hugo wrote in the Quotidienne of 30 July 1826 : “Admirable ! The crowd will read it like a novel, the poet like a drama and the politician like a story!”

A booklet was made from the novel by Paul Poirson and Louis Gallet, for an opera in four acts and five tableaus : Cinq-Mars, from the French composer Charles Gounod (1818-1893), performed in Paris in 1877.

A precious copy preserved in its attractive contemporary binding.

The copies in contemporary binding are extremely rare.