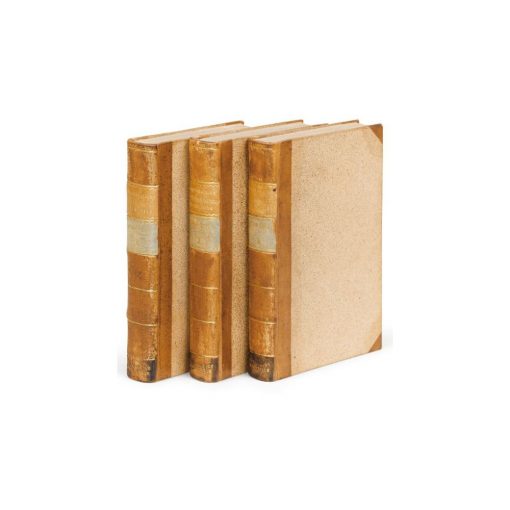 First edition of this essay by Madame de Staël,
from which originated the first great intellectual debate on the Revolution.

A copy preserved in its contemporary binding
from the “Library d’Hauteville”.

First edition of this essay which made a lot of noise and from which originated the first great intellectual debate on the Revolution.

Germaine de Staël built her literary work while in repeated exile, the price she had to pay for her political and social liberalism.

A woman of conviction, Madame de Staël, through her writings and the salons she successively held in Paris and Coppet, on the borders of Lake Geneva, had a considerable intellectual influence not only on literature but also on the society of her time.

Originally destined to be the political eulogy of her father, Jacques Necker (1732-1804), this work became an in depth-study of the French Revolution.

Mme de Staël exposes, with great clairvoyance, the causes and consequences of the revolutionary events going all the way up to the rise of Bonaparte and the birth of the Empire.

The text ends with an overview of English constitutional monarchy; the apology of a country she admired most of all.

The public welcomed this text with great enthusiasm.

“This famous text set the liberal interpretation of the French Revolution by separating 1789, for the first time boldly rehabilitated, from 1793.” (Yvert, Politique libérale, n° 24)

“The daughter of Necker, a popular minister, and famous woman of letters, Madame de Staël came from an intellectual elite.” (Carteret)

Her work, political, philosophical, literary and critical, is remarkably harmonious and shows great freedom of thought. Mme de Staël, a spectator of capital events, with a passion for politics, amply told of them. In her Considérations sur la Révolution, she offers a great ideological study of the 1780’s going all the way up to the Restauration.” (En Français dans le texte)

Born in Lacaune, in the Castres diocese, Philippe Cannac (1672-1750) came from a family of Huguenot bankers and left France after the revocation of the Édit de Nantes to find refuge in Switzerland, on the estate of Hauteville.

But Hauteville did not satisfy the owner’s ambition. He hired a young architect from Lyon, Donat Cochet, to draw the blueprints of a French-style castle that could welcome his family.

Pierre-Philippe Cannac died in 1785 and left his estate to his oldest son, M. de St-Légier. His grand-daughter, Anne-Philippine-Victoire, married Daniel Grand de la Chaise (1761-1828) and inherited the estate in 1794. This is when the young couple decides to adopt the name Grand d’Hauteville.

At the beginning of the 19th century, under the impulse of Daniel and Victoire, the castle of Hauteville became a place for society to mingle and of mundane attractions; illustrious visitors from diplomatic and royal spheres were welcomed there, balls, parties and theatrical evenings were often organized.

In 1811, Daniel and Victoire’s daughter married her cousin Eric Grand, the son of Jean-François-Paul Grand de Valency and Marie Labhard de Glarisseg, a legation advisor and the godson of the baron de Staël, the husband of the one Rosalie de Constant called the “too famous”. Mme Robert Rilliet, born Catherine Huber, a cousin of Mme d’Hauteville, narrated these events with emotion and poetry. A childhood friend of Germaine Necker and a close lifelong friend of the author of Corinne, Mme Rilliet lead in Paris and Geneva a remarkable philanthropic and mundane life. Her large black eyes and butterfly grace charmed everyone. She spoke with precious ways, maybe, and Benjamin Constant assured she had “all of the virtues she presented”.