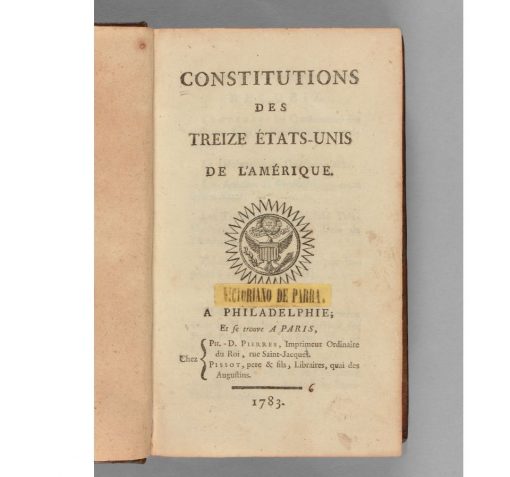 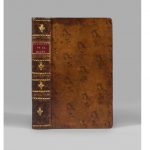 One of 500 copies printed on thick paper in 1783,
preserved in its contemporary binding.

Published two years after the first English edition, this French edition was put together by the duke de La Rochefoucauld on his friend Benjamin Franklin’s suggestion and brought the French Revolution forward.

This first edition is famous because of its United-States seal, “with woodcut of the eagle and star and stripes” designed by B. Franklin and engraved on wood on the title page (Sabin).

It is the first time the American seal appears in a book printed at the time.

“This book has the further distinction of bearing on its title page, the first imprint of the seal of the United States to appear in a printed book.” (Streeter)

“In the title The United seal (eagle and stars and stripes), its first appearance in a book.” (Howes)

Of the first edition, only 500 copies were published on thick paper.

The book contains the constitution of each of the thirteen States of America, the Declaration of Independence of the 4th of July 1776, the Friendship and commerce treaty and the Alliance treaty between France and the United-States signed by Benjamin Franklin in Paris on February 6th, 1778 as well as the treaties between the United-States and the Netherlands and Sweden.

“The French translation was made by the Duc de La Rochefoucault, at Benjamin Franklin’s suggestion, with over fifty footnotes by the latter and shows on the title-page the United States seal, its first appearance in a book. Franklin’s grand gesture in publishing and distributing these constitutions about which there was and intense interest and curiosity among statesmen, was one of his chief achievements as propagandist for the new American republic. » (Howes)

On March 24th, 1783, Franklin writes to the comte de Vergennes: “I am desirous of printing a translation of the Constitutions of the United States of America, published at Philadelphia, by Order of Congress. Several of these Constitutions have already appeared in the English and American newspapers but there has never yet been a complete translation of them.”

In a letter addressed to Thomas Mifflin, president of the American Congress, Franklin explains the reasons that pushed him to publish this this book: “The extravagant Misrepresentations of our Political State in foreign Countries made it appear necessary to give them better Information, which I thought could not be more effectually and authentically done, than by publishing a Translation into French, now the most general Language in Europe, of the Book of Constitutions… This I got well done, and present two copies to every foreign minister here, one for himself, the other for his Sovereign. It has been well taken, and has afforded Matter of Surprise to many, who had conceived mean Ideas of the State of Civilization in America, and could not have expected so much political Knowledge and Sagacity had existed in our Wilderness. And from all Parts I have the satisfaction to hear, that our Constitutions in general are much admired.”

“Among the Franklin papers are numerous letters from the Duc de la Rochefoucauld, all undated, referring to his translations. These letters show that Franklin made suggestions; and it is very probable that the foot-notes throughout were, partly at least, his. The device upon the title-page of this volume seems to be the first appearance of the Arms of the United States in any printed book. The ‘Great Seal, which, as we know it, was mainly the design of Charles Thomson, was adopted by Congress on June 22, 1781.” (Franklin and its press at Passy, L. S. Livingston)

Influenced by the spirit of the Enlightenment, the Declaration of Independence brought about the French Revolution of 1789.

“The Declaration of Independence was translated into French and had during the French Revolution tremendous influence on the committee charged with writing the constitution. Even more so on the Déclaration des droits de l’homme et du citoyen de 1789 “(J. N. Tama)

The French revolutionaries saw in America a model to be followed.

In a speech given on the 10th of July 1791 Brissot proclaimed : “The American revolution gave birth to the French Revolution : it will be the sacred hearth where the spark that will ignite all nations whose masters dare to approach it will start !”

A precious copy where the name of the first owner, “Victoriano de Parra”, is mentioned on the title leaf.

The personalized copies on thick paper are rare and very sought-after.