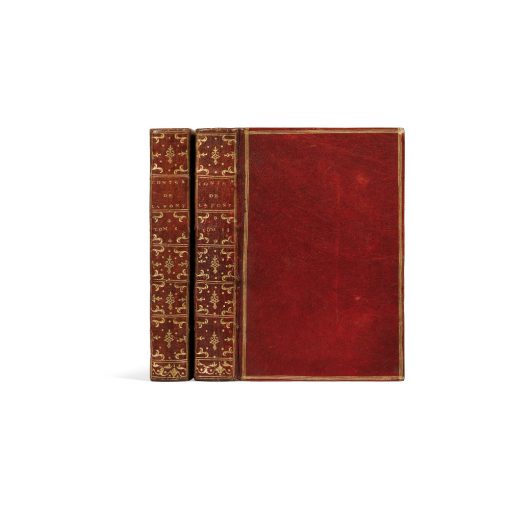 The famous edition said to be “des Fermiers généraux”
of the Contes by La Fontaine, in contemporary morocco.

The superb edition of the Fermier général Saulot de Bospin,
with ex-libris, with the 80 figures before the letter,
enlarged with 12 figures of which 3 were refused
and including 2 uncovered plates.

Magnificent leading copy of this “Fermiers généraux” edition, printed on beautiful Auvergne laid paper, printed at 1000 copies of which none were sold but all put aside for the Fermiers.

This copy contains 80 figures before the letters.

The plate of the Diable de Papefiguière is uncovered and so is the one titled Cas de conscience.

The figures for Alix malade and Le Remède are trial proofs.

“Among the illustrated books of the 18th century, this edition of La Fontaine’s Contes, called des Fermiers Généraux, because they paid for it, is the most beautiful and pleasant ; furthermore, it is Eisen’s masterpiece. It may seem common but it is quite sought-after and reaches a high price, especially when the proofs are of such quality and the binding is elegant and well executed.” (Cohen, 306)

The baron Roger Portalis, a great lover of 18th century illustrated books, considers this book to be the most accomplished in all of Louis XV’s century.

“We are in a hurry to get to what is considered to be Eisen’s masterpiece, this book that was for a long time thought to be the most accomplished of the 18th century, an inimitable book to be sure, due to the collaboration of three charming artists, “les Contes de La Fontaine” (1762), printed by Barbou at the Fermiers généraux’s expense. It is true that they chose well: Eisen, who interprets with a French grace these licentious but oh so witty tales by our great writer of tales ; de Longueil, who engraved the drawings with a chisel so brilliantly and in such great harmony with his models ; Choffard, finally, who added the finishing touches, elegant tail-pieces that only he could create. MM. the Fermiers généraux must have been quite satisfied with the book they helped create and, if they refused some of the figures, considered to be insufficient or too daring, it was in order to meet perfection.

Such a charming artist is Eisen ! His pencil is always witty, whether he lovingly caresses the plump throat of « la Servante justifiée », the croup of « la Jument du compère Pierre », the ring of « Hans Carvel », whether he seizes the mischievous faces of the « Trois commères », or the lecherous figures of the « Cordeliers ». He knows how to uncover the prudish swarm of the nuns in the « Lunettes », the cause for surprise in the « Diable de Papefiguière », the « Cas de conscience », and one doesn’t have to insist much to convince him to let us catch a glance of the “Rossignol”.” (Baron Roger Portalis)

A precious copy from the leading copies decorated with exceptionally pure engravings.

It is decorated with the 80 figures before the letters, enlarged with 12 figures of which 3 were refused and includes 2 uncovered plates.

With wide margins (height: 174 mm), the copy is preserved in its contemporary red morocco binding.

A magnificent leading copy, on pure laid Auvergne paper, wide-margined, with uncovered figures and an elegant contemporary binding : these are the demanding but necessary requirements for the Fermiers Généraux edition.