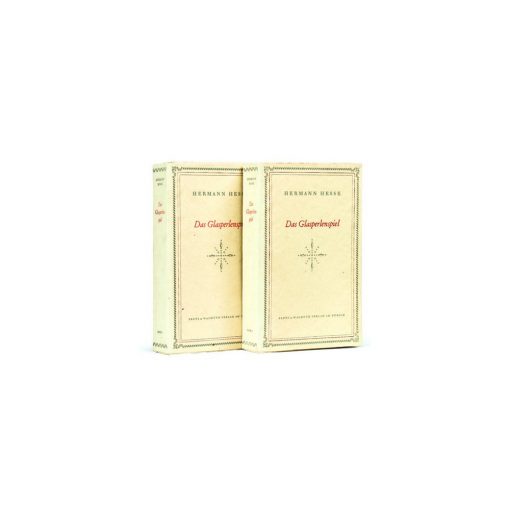 A precious copy, very pure, preserved in its original publisher’s wrappers,
as issued, a rare and sought-after condition.

First edition of “Hermann Hesse’s ultimate masterpiece” (A. Boloumié) that was submitted to the censorship of Nazi Germany.

“The rejection of the contemporary world, the idea of an elite of the mind, the dream of a spiritual East, make up the narrative of this great novel, “Das Glasperlenspiel” (The Glass Bead Game, 1943), by Hermann Hesse (1877-1962), who immigrated from the south of Germany to Switzerland before 1914.

Keeping in line with his thoughts from the 1920’s on the decline of Europe, the writer lashes out that what he calls the Ungeist (the blunt spirit) of this “chaotic and Babylonian” time period. He incriminates the bourgeois culture, its materialism, and the two principal “diseases of the mind”, technicism and nationalism.

In line with Nietzsche, Hesse imagines an ideal cultural community he calls “Castalia” (Kastalien), a sort of island of spirituality in the humanist tradition.

But Castalia is not only the dream of a secular and cultural church of the spirit, the ideal of a Platonic cohort of “ascetic and heroic intellectuals” haunting the German humanist ideas of the last two centuries, it is also a return to the oriental sources, to meditation, a contemplation of the inner self. Hesse, who very early on heard the call of India first and, later, China, wanted to create with the “Glasperlenspiel” a broad synthesis of the Western and Eastern spirit in order to reestablish the fundamental unity of man and the world.

“Hermann Hesse’s last great work, the utopian novel “Das Glasperlenspiel”, set in the year 2400, relates the life story of Joseph Knecht, a former Magister Ludi or Game Master. An exceedingly complex work fraught with symbolic significance, “Das Glasperlenspiel” is a metaphor for the game of life, embracing the sensual and the spiritual. In the same year, Hesse was accused of having betrayed German literature to Judaism and was blacklisted in Germany. This resulted from his criticism of Nazi ideology.” (M. E. Noordhoom)

“The “Glass Bead Game” was conceived and written by Hermann Hesse between 1932 and 1943, which coincides with the Third Reich. That is not by chance. The utopia developed by the author, so he says, must be read as one long protest against the lies, the sheer stupidity and the barbary that characterized national-socialism. Hesse saw in the act of writing and in utopia the only mean of protest compatible, in his pure intellectuality — that is apolitical —, with literature’s mission. Hesse did not believe in the “direct intervention of the spirit in life”. For his part, his mission was to “preserve the spirit in its substance, to serve the words and truth” and “recall the fundamental and sacred principles of humanity”. (D. Bousch, Utopie et science-fiction dans le roman de langue allemande)

A precious copy, very pure, preserved in its original publisher’s wrappers, as issued, a rare and sought-after condition.