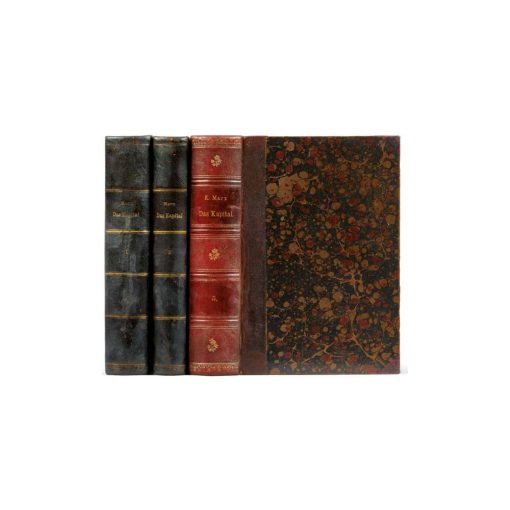 “One of the most influential book of modern times” (Dr. B. L. Shelley).
Das Kapital, “the summation of Karl Marx’s quarter

of a century’s economic studies” (PMM).

A copy preserved in its contemporary bindings.

This edition of the first volume is the last to have been published in Marx’s lifetime and is considerably enlarged from the first edition of 1867.

Only this first volume was published in Marx’s lifetime; his friend and supporter Friedrich Engels edited and published volume II in 1885 and volume III in 1894.

This edition of the first volume was the last to be published in Karl Marx’s lifetime and was considerably enlarged from the first one dated from 1867.

Only the first volume was published while the author was alive; the following two volumes were published in 1885 and 1894 under the impulse of Friedrich Engels.

“Only the first volume of Marx’s magnum opus appeared in his lifetime, though in a letter to his friend Dr. Kugelmann in the autumn of 1866, he described a four-book three volume work on lines identical with those edited by Friedrich Engels after his death. Volume 1 is the “Critical Analysis of Capitalist Production; volume 2 (1885) discusses the process of circulation of capital; volume 3 (1894) the process of capitalist production as a whole. Marx himself modestly described Das Kapital as a continuation of his Zur Kritik der Politischen Oekonomie, 1859.

It was in fact the summation of his quarter of a century’s economic studies, mostly in the Reading Room of the British Museum. The Athenaeum reviewer of the first English translation (1887) later wrote: ”Under the guise of a critical analysis of capital, Karl Marx’s work is principally a polemic against capitalists and the capitalist mode of production, and it is the polemical tone in which is it chief charm”. The historical-polemical passages, with their formidable documentation from British official sources, have remained memorable; and, as Marx wrote to Engels while the volume was still in press” I hope the bourgeoisie will remember my carbuncles all the rest of their lives”. Carbuncles, financial embarrassment and political preoccupations of many kinds hampered Marx’s work on Das Kapital, which he would never have completed but for the material and moral support of Engels.” (PMM)

“The history of the twentieth century is Marx’s legacy. Stalin, Mao, Che, Castro — the icons and monsters of the modern age have all presented themselves as his heirs. Whether he would recognize them as such is quite another matter… Within one hundred years of his death half the world’s population was ruled by governments that professed Marxism to be their guiding faith. His ideas have transformed the study of economics, history, geography, sociology and literature.” (Wheen)

It is often recognized that the first volume does not give a complete idea of Marx’s ideas.

His work generated the most diverse opinions. However, even his declared adversaries couldn’t not bend to his greatness. Werner Sombart, one of the German economists who most vehemently disputed Marxism, said: “If economic science managed to arrive, through research, to fecund results, it is because during a century Marx opened the way, thanks to his genius way of laying out the problems. And we can now affirm with certainty that the economists who refused to follow in his path have worked for nothing.”” (Dictionnaire des œuvres)

A pure copy preserved in its contemporary binding.

Finding the three volumes together is very rare.

No copy reuniting the three copies in a coherent contemporary binding has been mentioned on the market since the beginning of the surveys 35 years ago (ABPC).