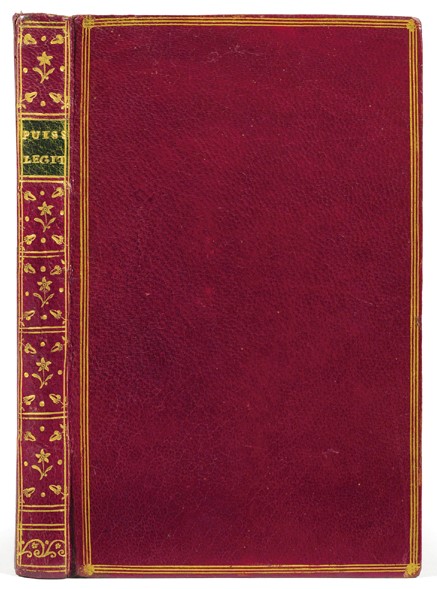 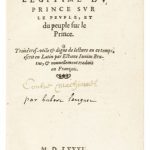 First French edition,
“more sought-after than the Latin edition” (Brunet)
of “one of the most dangerous books of its kind” (Abbé Lenglet).

“It’s one of the perennial documents of anti-tyranny” (PMM).

“One of the most dangerous books of its kind” (abbé Lenglet), this book contains political ideas that had a considerable influence and were later taken up by all those who fought for freedom and justice.

Under the appearance of a purely theological discussion, Duplessis-Mornay says things that were revolutionary at the time. He analyses individual freedom, the rights of the people against the king and speaks out against tyranny by acknowledging the possibility of regicide a few years before the assassination of king Henri III.

Born from the Saint-Barthélemy, this is one of the most profound testimonies of the fight against tyranny. It holds within itself the seedlings of all modern constitutional ideas.

Philippe Duplessis-Mornay (1549-1623), a reformed theologian, writer and French politician, was a friend of Henri IV and one of the most eminent men in the Protestant party at the end of the 16th century.

“Mornay was a spectator or an actor of all the great events that deeply shook modern societies. He listened to Luther and Calvin’s first disciples, saw the development of the Renaissance, of the religious civil wars of the 16th century and heard the sinister cries on the night of the Saint-Barthélemy. After having been one of Henri IV’s most noble friend, he foresaw, in his old age, Richelieu’s despotism. So many centuries ago, Duplessis knew everything we know today on politics, morality, humanities : on diplomatic matters, he knew as much as all modern politicians.” (J. Ambert, Duplessis-Mornay, Etudes historiques et politiques)

He narrowly escapes the massacres of the Saint-Barthélemy and seeks refuge in England. He takes an active part in the attempts made by the Protestants to associate their cause to François d’Alençon’s, and bonds with Henri of Navarre, chief of the Huguenots, to whom he will be the principal advisor before he becomes king Henri IV of France.

Aware that the protestant cause will only be able to dominate if defended by a most able prince, he decides to rally the king of Navarre, the future Henri IV, becoming his advisor in 1576 and his ambassador. As of 1583, Mornay’s role in the rise of Henri of Navarre as a potential heir to Henri III is probably considerable and doubtlessly not well known.

Philippe Duplessis-Mornay fervently worked to bring the king of France Henri III and Henri of Navarre closer together.

He is the one who negotiates the agreement signed in 1589 between the king and his heir. Henri de Navarre wins Saumur, one of the principle citadels of French Calvinism with La Rochelle and le Poitou. He entrusts their management to his faithful Mornay who takes up his post on 15 April 1589. He will remain governor for 32 years, until the 13th of May 1621. During that time, he is considered to be the brains of the Protestants, the “Pope of the Huguenots”.

“Mme de Mornay says in her “Mémoires” that her husband, being in Jamets in 1574, “wrote in Latin a book titled “De la puissance légitime d’un prince sur son peuple”, which was then published and brought to light without many knowing who the author was.” It is strange that, even though there was a precise testimony, a lot of critics attributed the book to Hubert Languet. Albert Elkan studied the question and confirms that Philippe de Mornay wrote the book.” (E. Picot, Catalogue J. de Rothschild, IV, 3126)

Printing and the mind of man underlines the importance of this capital work in the history of ideas. It was subversive for the time, claiming that the people had the right to resist all forms of tyranny :

“It is an eloquent vindication of the people’s right to resist tyranny while affirming that resistance must be based on properly constituted authority. It is in fact the practical demonstration of Bodin’s theory, and some measure of its impact and continuing relevance may be estimated from a study of the places and dates at which it had been translated or reprinted. It’s one of the perennial documents of anti-tyranny.” (PMM)

A precious copy of this major work by Duplessis-Mornay, very rare and preserved in its beautiful old morocco.