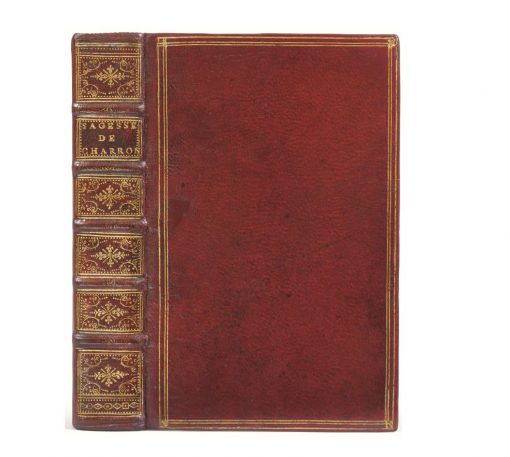 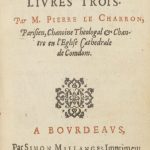 The first edition of La Sagesse by Charron
preserved in its old decorated morocco
attributed to Pierre Rocolet, in activity as of 1638.

A luxurious Parisian binding attributed to the workshop of Pierre Rocolet, in activity as of 1638.

First edition of « De La Sagesse » by Charron (1541-1603), his major work, considered by Sainte-Beuve to be the didactic edition of Montaigne’s Essais.

“De la Sagesse” continues “Les Essais” by Montaigne of whom Charron was the disciple and heir.

The Trois livres de la Sagesse was published in Bordeaux in 1601. It is a vast treaty on moral philosophy.

“Charron probably considered Montaigne’s brilliant insights wasted in the disorder of the Essais and hoped that the regular plan of his own Sagesse would preserve them. Many readers felt this way; and for two third of century the two works were equally popular.” (D. M. Frame, Montaigne)

“’La Sagesse’ can be seen, at the beginning of the 17th century, as a first effort to put some order into all the emerging ideas. Charron opens the way for Bacon, Descartes and Pascal.” (M. P., Dictionnaire des Lettres françaises)

On his house he had engraved the motto of the sceptics : I know not.

It is correct to say that Charron benefited from Montaigne’s experience.

He considered it his right since Montaigne had made him his heir.

His way of thinking was clear and precise, opening the way for the 17th century moralists and especially the treaty on the “Passions de l’âme” by Descartes.

“Charron had the same admirers and the same opponents as Montaigne, and the good fortune that befell “La Sagesse” is very similar to the one that befell the “Essais”. Translated into Italian, English and German, it was edited 49 times in France between 1601 and 1672.” (M. Dreano)

From 1576 to 1594, Pierre Charron (1541-1603) mostly resides in Bordeaux, which gives him the opportunity to befriend Montaigne. While the latter was writing the Apologie de Raimond Sebond on the request of a queen which seems to be Marguerite de Valois, Charron was preaching to the court in Nérac in front of the same Marguerite.

Master and disciple considered themselves to be members of the same family.

Condemned by the Parliament, the University and the Jesuits when it was published in 1601, Charron’s book became, for the libertarians, the epitome of free thought.

It is mentioned in 1645 by Gabriel Naudé as being a very rare book.

Provenance : Library of Guy Pellion, with ex-libris ; handwritten ex-libris on the title page.

It bears on the endpaper this handwritten annotation from the 17th century: “This edition is quite prized because it contains several pages which were taken out or dampened in the Paris edition of 1604, published after the author’s death. 4 to 6 times more expensive in red morocco.”

A precious copy, mentioned by Tchemerzine, one of the rare ones preserved in its decorated morocco binding from one of the most brilliant workshops of the 17th century, the workshop of Pierre Rocolet, in activity as of 1638.