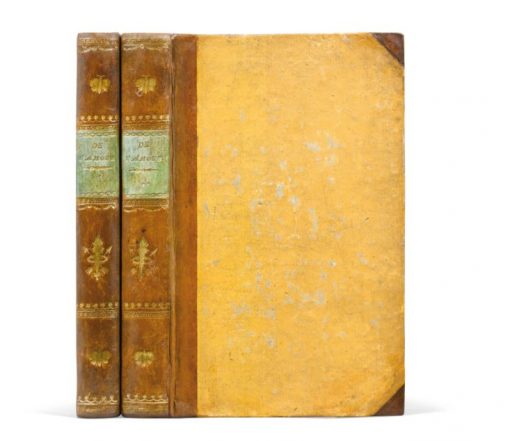 preserved in its contemporary binding.

“A very sought-after text: its title is one of the reasons, on the same level as the others, and a statement. An audacious and coldly realistic book that caused quite a stir at the time. We know that the readers were scarce and that all of the copies passed into the hands of Bohaire, Mongie’s successor, who put the book back up for sale.” (Carteret)

First issue copy, before the second notice of sale, at Bohaire’s address, in 1833.

Stendhal who, his whole life, looked for happiness in love, personally implicated himself in what he believed was his most important work.

It is in this book that, to describe the birth and formation of love, Stendhal uses the now famous metaphor of “crystallization”.

It was an enormous failure. Two years after the first offer for sale, the editor Mongie told the author : “I did not even sell forty copies of this book and I can say that they are like Pompignan’s Poésies sacrées: sacred they are because no one touches them.”

Despite this failure, Stendhal had for the rest of his life a soft spot for this book.

Eight years before his death, he was writing the preface for the third time. In it, he exposed his most intimate beliefs and an entire science of happiness, and it was all so important to him. The book was written in Milan under the influence of his passion for Métilde Dembowski, a liberal activist who never responded to his fervor. Among all of his elder’s books, Baudelaire had a preference for De l’Amour which he quotes several times on his list of comforting maxims on love.

A beautiful and precious copy of this rare first edition, with no foxing, and preserved in its contemporary binding.