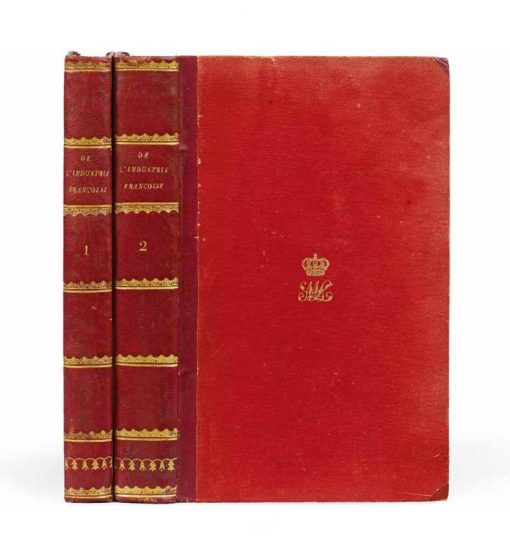 First edition of the first treaty on modern France’s industry and trade by Chaptal.

The precious copy of Marie-Louise, wife of Napoleon.

Rare first edition of the first treaty on modern France’s industry and trade.

“A remarkabke work” (P. Clément) presenting the state of the French economy at the end of the Napoleonic era and he beginning of the Restauration.

“Jean-Antoine Chaptal (1756-1832) had a brilliant start. In 1783, he publishes the “Tableau analytique” of his chemistry class. In 1790, the “Eléments de chimie” are published and translated into many languages. A writer and professor, he then decides to become an industrialist. His discoveries travel beyond the borders but he refuses all proposals, preferring to use his talents in France.”

After the revolution of the 18 Brumaire, he was called to the State council that the first consul had just instated. He was appointed minister of the interior. The actions he undertook for the modernization and economic development of the country were decisive.

“There never was a more useful directive to the well-being and wealth of France that was printed in this ministry. Due to Chaptal’s intelligent initiatives, many important measures were taken : the creation of stock markets, of the chambers of commerce… The list of all the things he accomplished between 1800 and 1804 would be too long.”

The Emperor appoints him to the Senate in1804, makes him grand-officier de la Légion d’honneur and gives him the title of comte de Chanteloup. In 1807, Chaptal dedicates his Chimie appliquée aux arts to Napoleon.

During the Hundred Days, he is entrusted as head of Trade and manufacture and in 1819 he becomes a member of the Chambre des pairs. He joins the commissions dedicated to trade, industry and agriculture.

“A mentor of the first French industry”, “Chaptal is a pioneer and the first to have associated chemistry and industry, theory and practice.”

“The precision and objectivity of the foundations of his work have been a decisive addition to the study of political economics.” (J. Pigeire)

The precious and touching copy of Marie-Louise, archduchess of Austria (1791-1847), bound with her cipher.