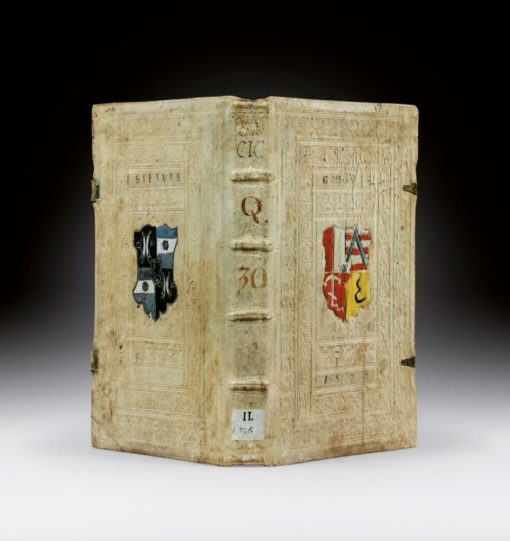 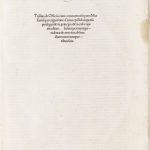 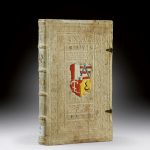 A remarkable Venetian incunable edition
of the De Officiis by Cicero, missing at the B.n.F,
in a spectacular binding
with painted arms from 1575.

Rare incunable edition of the De officiis by Cicero.

Printed by Filipo Pinzi of Mantova, commented by the Italian humanist Pietro Marso (1441-I512), who was an important disciple of Pomponio Leto. This is the second revised version. The first dedication to Francesco Gonzaga was here replaced with a dedication to the cardinal Riario.

Missing in the B.n.F., only two copies in French and British libraries (and only one complete), six copies in American libraries.

Contemporary annotated copy (annotations were slightly trimmed on binding) by the hands of two Italian humanists, mostly in the first two books of the De Officiis and in the final dialogues. Some letters and small ink drawings in the margins (a horse l. 47v, a donkey l. 82, a bird l. 102v).

Rendered less arid thanks to numerous examples of everyday life taken from history, this treaty of the « De Officiis » is in line with Roman teaching methods. There are beautiful and large pages where one can feel a deep and warm paternal bond, an ardent patriotism and a visceral attachment to humanity. They show us an aspect of Cicero that is simple and frank. It seems that while waiting for the right moment to go on stage, the orator improvised this book, which is so different from the others, mostly because of the absence of dialogues. The objections are anticipated and refuted. The style recalls the simple and confidential tone of some of his letters to intimate friends and not the ambitious one of his philosophical treaties.

Many members of the important Austrian Starhemberg family, who were counts as of 1643 and princes in the 18th century, were book collectors. We know that the castle of Peuerbach, which belonged to Gundakar XI, was inventoried in 1571 and described a very large library.

This volume then went on to his nephew Heinrich-Wilhelm (his ex-libris on the title is dated in Riedegg, 1652).