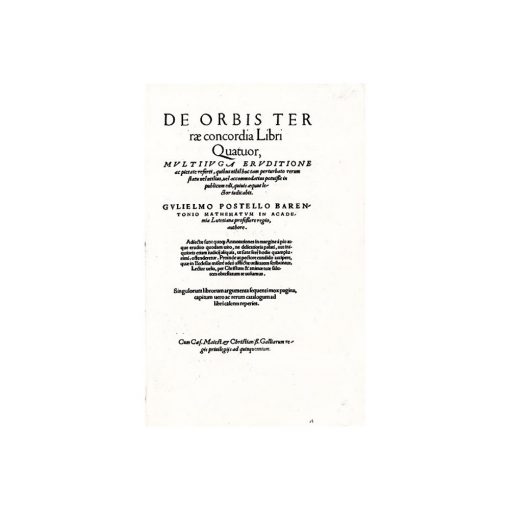 Mostly first collective edition of “Postel’s most esteemed work” (Nicéron) on the reconciliation of the great religions.

Only book I had been published the previous year in Paris by Pierre Gromors, at the author’s expenses.

In this important work by the humanist figures a passage on America and the necessity of Christianizing the Indians of the New World.

« Guillaume Postel considered this his most important work. It is primarily an urgent appeal to and a practical manual for, the Christian mission among the Moslems with an exposition of Islam, based on quotations from the Koran.

This book is the most important of the books Guillaume Postel published. It is a development of the first book printed the year before by Gromors.

Oporin did not put his name, probably so as to not attract the critics of the Protestant German milieus, but this text could not be printed in France, the Sorbonne having judged it “ad facultatem non pertinens”.

Written in three months and dedicated to all the princes of the world, this text is divided in four books: the first is a rational philosophy of Christian religion, the second a presentation of the Coran, the third seeks what is common to the whole planet in terms of human and divine rights, the fourth studies the ways to rally the “pagans”, the Turcs and the Jews to the Christian religion.

“At the time Postel was writing this Traité, he was inciting François Ier to reform so as to deserve being the universal Christian prince who would reign over Jerusalem : the De Orbis is in some way the manifest of this utopian program.” (P. Mesnard, L’Essor de la philosophie politique au XVIe siècle, pp.431-445)

“Sponde makes a strong case for this book, which he says is prone to confuse the Heretics, the Gentiles and the followers of Muhammad, and adds that Vivès took what was best from it to add to his Traité de la Religion Chrétienne. Is in truly Postel’s most esteemed work. His purpose is to bring the Christian religion to all the peoples of the universe and he says on that topic some very intelligent and interesting things. There is much erudition, especially when he speaks of the Muhammad religion and the Coran.” (Niceron)

A great French humanist, orientalist and mystic, Guillaume Postel (1510-1581) here preaches the reconciliation between Muslims and Christians all the while reaffirming his “universalist and Gallican tendencies”. (Claude Postel)

The “Annotationes” announced on the title-page are by the hand of a person P.G. Bietenholz considers a “black sheep among the ecclesiastics of Zurich” : Theodore Bibliander, who was in relation with Postel. These annotations concern the first book (68 remarks) and the second (14). Those from the first book essentially refer to the chapters that Postel recommended reading first (chap. XX on the immortality of the soul: 18 remarks, chap. VII on demon genies: 9 remarks).

It is because of these remarks that the book will be inserted in the Index de Louvain in 1550 (n° 215), and then 1558 (n° 210), under the following mention: “Annotationes in Guilielmum Postellum de orbis terrae concordia, incerti authoris”, a mention that is also found in the Catalogue des livres hérétiques de Venise of 1554.

First edition. Major work for the French polymath, an effusive appeal for Christian mission among the Moslems with an exposition of Islam based on quotations from the Koran. With 5 fig. woodcut initials”.

A precious copy with handwritten annotations in the margins made by a former erudite possessor commenting the text.