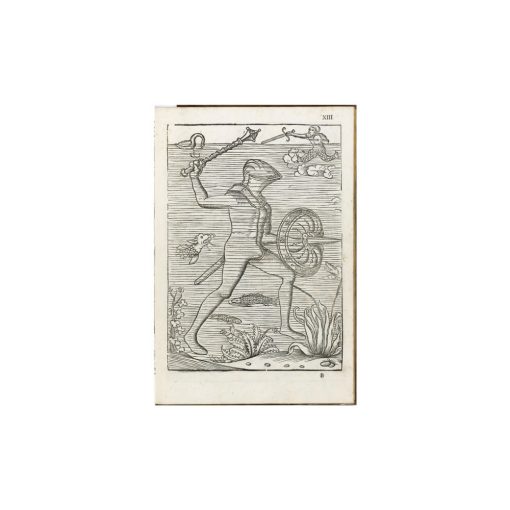 A very rare series of 195 woodcuts of very nice craftsmanship
due to Hans Knapp and M. Scharzenberg.

This edition went unnoticed to most bibliographers, with the exception of Graesse (Trésor de livres rares et précieux) who mentions it according to the Crevenna (1776, II, p.231) catalogue which describes it as such:

“This book seems to have been executed at the beginning of the 16th century but no bibliographer has known of it. It is quite singular and curious and we do not presume to be mistaken by saying it is a very rare book.”

It is around the years 1511-1512 that Hans Knapp printed this series in Erfurt.

In 1511, he edited a German version of Vegetius’ text illustrated with 121 full-page woodcuts.

A short while later, he undertook the printing of this series which contained 74 extra woodcuts here published for the first time and which will not be included in the posterior editions. The illustration of the 1511 German edition served as a model for the 16th century edition but without the 74 extra woodcuts.

This spectacular series is precious because of the very superior quality of its wood compared to the later editions and for the 74 woodcuts in first issue that are absent from later editions.

Of beautiful craftsmanship, this is a wonderful display of the art of war at the beginning of the 16th century. The soldiers are represented in action, with their armors and machines of war.

The lively scenes, full of picturesque details, are for the most part due to Hans Knapp himself, whereas some are signed with the monograms PVM et MS (Melchior Scharzenberg).

On two very intriguing figures, we can see the use of flint and the first version of an inflatable mattress (C3).

A precious copy, complete, with wide margins, unwashed, of an extremely rare series of good craftsmanship.