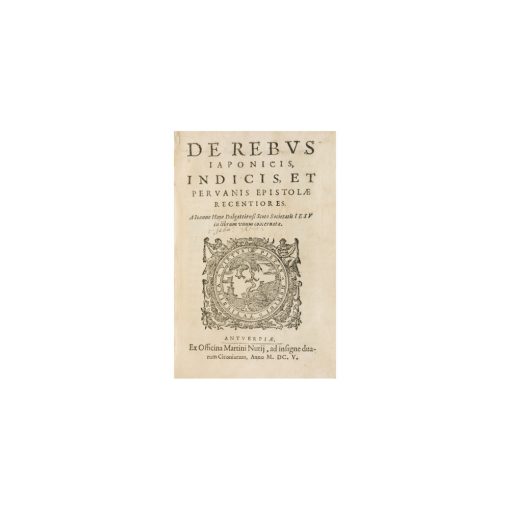 First edition of this important work
on the Jesuit missions in India, China, Japan
and Peru, at the end of the 16th  century.

on the political history of India and Japan”

Copy preserved in its contemporary vellum.

First edition of this important work on the Jesuit missions in, China, Japan, Korea and Peru, at the end of the 16th century.

This very rare and very sought-after compilation comprises of 55 letters written between 1577 and 1601.

It is followed by a life of Ignacio de Loyola, the founder of the Jesuit order, by Maffei.

“Some of the information given here by the author is not found elsewhere.” (S. Neill).

Listed by Cordier and assembled by the Scottish Jesuit John Hay (1546-1607), these letters are about the Jesuit missions in Japan and China at the end of the 16th century.

An important part of the book is dedicated to Korea.

In a letter dated in 1592 and written in Nagasaki, the Jesuit missionary Froes gives details on Hideyoshi’s campaign against Korea.

In another letter dated June 6th, 1577 and written in Bonga, Ludovic Froes gives a general history of Japan.

A Scottish Jesuit, John Hay (1546-1607) was banished from his country in 1579 and became rector of a Jesuit school in Pont-à-Mousson, France.

The history of the Jesuit missions in Asia and America in the 17th century show us day to day life with an abundance of details. The missionaries had to write about the countries they were Christianizing:

Geography, history, mores and customs, religion and government, all had to be described and analyzed with precision. In the society of the Ancien Régime, where information scarcely traveled, receiving a letter from Asia or America was a boon. The Superiors in Paris quickly understood the interest of publishing these exotic accounts that enchanted learned audiences.

They edited in volumes the accounts sent to the parent house. They had to show the progresses of the mission, the conversions that were made, the acts of sainthood.

In the letters, we see the arrival of the missionary from Europe in Asia or South America.

The letters have an epic dimension to them and are likened to adventure novels.

In order to bring to Europe the knowledge that would contribute to “the progress of science or the development of the arts”, the Jesuits collected a vast documentation on fauna, flora, natural sciences, geography, uses and customs of the inhabitants of the countries they were trying to evangelize. (J.L. et I. Vissière, Lettres édifiantes et curieuses)

The collection is followed by a life of Ignacio de Loyola, the founder of the Jesuit order, by Maffei.

“Giovanni Pietro Maffei (1535-1603) is one of the best writers the Jesuits proudly call one of their own.

Maffei’s books are written with remarkable simplicity and ease.” (Michaud)

A copy preserved in its contemporary vellum.