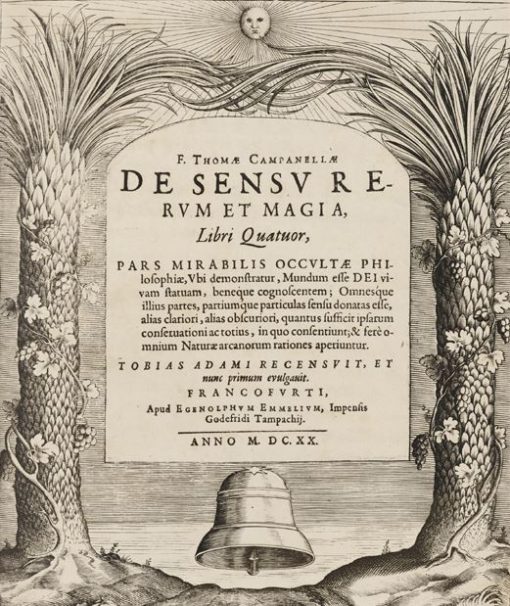 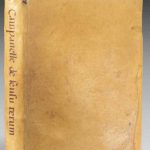 Precious first edition of this
fundamental work by Campanella
written while he was being tortured in prison by the Inquisition.

“A very curious and rare book.

One of the most curious books on magic” (Caillet)

“Campanella’s books, neglected for so long,

are now quite sought-after” (Brunet).

4to [228 x 165 mm] of (8) ll., 371 pp. bound in full vellum with overlapping edges, MDU cipher blind-stamped in the center of the upper cover, some restoration in one corner, handwritten title on spine, marginal restorations affecting some ll. Old binding.

Precious first edition of this fundamental work by Campanella written while he was being tortured in prison by the Inquisition.

This is a « very curious and rare » book (Caillet), « full of daring paradoxes » (Brunet).

“Campanella’s books, neglected for so long, are now quite sought-after.” (Brunet)

“This edition is precious because the author had to rework his text and because all of the posterior editions were published expunged.” (Caillet)

“It does not deal with Alchemy, but describes a kind of cosmology or speculative physics, in the  course of which he tries to prove that everything is possessed of feeling. He discusses the senses, the intellect, the soul, immortality, physiognomy, anima mundi, the external world, sympathy and antipathy, magic…» (Ferguson)

“Campanella was considered one of the most sublime philosophers of his time. The author was persecuted for being a magician but was released from jail at the pope’s request.” (Caillet)

Tommaso Campanella (1568-1639), “an exceptional man, one of the most remarkable men of the Italian Renaissance” (Dictionnaire des auteurs), opposed Aristotle’s doctrine, considered very favorably at the time. An admirer of Bernardino Telesio’s teachings, he joined him in Naples. This is where he was arrested the first time and charged with « telesionian rationalism ». He meets Galileo in Bologna and is once again accused of heresy and sent to the Santangelo castle where he is incarcerated at the same time as Giordano Bruno.

The inquisition found him guilty and he spent 27 years in prison where he wrote most of his political and philosophical treaties. He spent the last years of his life in France thanks to a pension granted by Richelieu and Louis XIII.

“Campanella, who was tortured seven times, proclaimed in his “De sensu rerum et magia” of 1620 that the stars were animated and had intelligent life. He became an ardent renovator of liberal philosophy against Aristotle. He is one of the martyrs of cruel and blind zealotry.” (Les mondes imaginaires…, C. Flammarion, p.329)

Campanella belongs to the history of the humanities because of how he influenced French thought. A renowned philosopher, he became friends with Gabriel Naudé in 1631. Naudé greatly admired the Italian thinker and considered him to be the “phoenix of all philosophers and politicians”.

An heir to the 16th century Humanists, the philosopher is one of the great pioneers of the experimental method ; Mersenne, Descartes and Gassendi did not read him in vain.

A large number of Campanella’s works were published in Frankfurt by Tobias Adam who spent eight months in Naples in order to visit him in prison and then became one his most fervent disciples. He convinced Campanella to translate his texts into Latin so he could reach more people and published them when he returned to Germany.

A wide-margined copy preserved in its old vellum binding, with an MDU cipher blind-stamped in the center of the upper cover.

The Medinaceli family is a Spanish noble house with origins going back to the Castillian crown and linked to Gaston Phoebus. As of 1789, it took up the name Medinaceli y Santisteban.