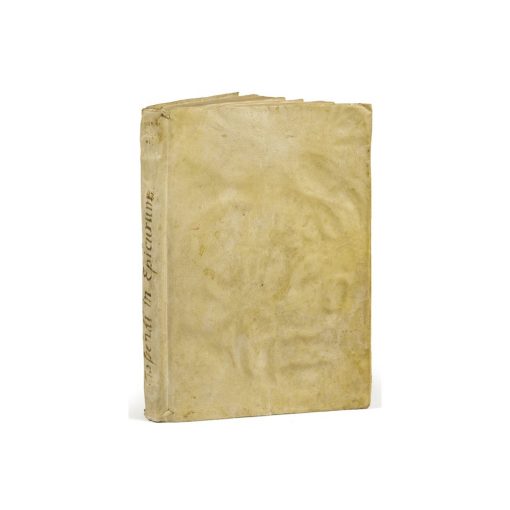 “One of the men who most honor philosophy

and the nation” (Diderot).

First edition of this major text by Gassendi
who had a strong influence on the emergence of the rationalist movement
in the century of the Enlightenment.

First edition of this major text by Gassendi who had a strong influence on the emergence of the rationalist movement in the century of the Enlightenment.

This text lays down the foundations of Gassendi’s Epicurean atomism and intends, for the first time, to officially rehabilitate Epicure.

The atomist thesis developed by Gassendi will be used by Boyle and adopted by Newton.

“Before Galileo and Descartes had succeeded in combining mathematics with mechanics, the chief refuge of hard-headed opponents of scholastic verbalism and Renaissance Platonism was the tradition of Greek atomism. Its chief representative during the period of Cartesian domination was Gassendi, who stands both as the climax of Epicurean atomism of the Renaissance in its accommodation to a mathematical science of nature, and as the first of the explorers of the implications of that science for the traditional empirical philosophy of knowledge.

Gassendi is with Hobbes one of the fathers of ‘scientific’ empiricism.

Gassendi indeed fancied himself the creator of the great rival scientific system to that of Descartes, the system founded on sound experience. History has reserved that distinction for Hobbes; yet it probable that Gassendi contributed far more to the actual advance of scientific ideas than his more consistent and gifted British fellow-worker.” (J.H. Randall)

“I don’t believe, says Bayle, that in any country where it was written about this philosopher [Epicure], it was done as well as Gassendi : what he wrote on this topic is a masterpiece, the most beautiful and accurate collection possible.”

“No one has championed Epicure with as much spirit or joy than Pierre Gassendi, a truly great man, a truly great scientist if there ever was one in all of science.” (Sansom Parker).

Gassendi (1592-1655), “the most savant of philosophers and the most able philosophers of savants in the 17th century” (Tennemann) obtained the Chair of Philosophy at the university of Aix.

Copernic, Galileo and Kepler’s discoveries had shown him that Aristotelianism was insufficient and he tried to make that known in his lessons. In 1624, he went to Paris where he connected with all of the distinguished spirits of his time, La Mothe Le Vayer, Mersenne, Descartes, Kepler and Galileo.

If the rivalry between Gassendi and Descartes was great, they found common ground in their opposition to Aristotle.

Like Descartes, Gassendi establishes the primacy of reason over superstitions.

“Leibniz is the one that is close to Gassendi, both of them tend to substitute a dynamic to Cartesian mechanism. But Gassendi is more linked to the empiricist and scientific current, which was still marginal in the 17th century but which, through Fontenelle, will have great influence in the next century.

Gassendi claims to be a follower of Epicure to whom he dedicated many books.” (Dictionnaire des auteurs)

Luillier, knowing of the notes Gassendi had gathered on Epicure’s life, had them printed in Lyon in 1647. The treaty was well-received, which encouraged Gassendi. With newfound ardor, he got back to studying Epicure and preparing important materials that he later used for the books dedicated to this philosopher. Gassendi sought to show that Epicure’s life had been slandered and falsified. In the work he undertook, he managed to expose Epicure’s life and doctrines. It was necessary to gather, put some order and discuss the testimonies that had survived over the centuries. Gassendi did it with a rare joy and the treaties he published are masterpieces of erudition and healthy criticism. (Franck)

A beautiful and precious copy, preserved in its contemporary vellum.