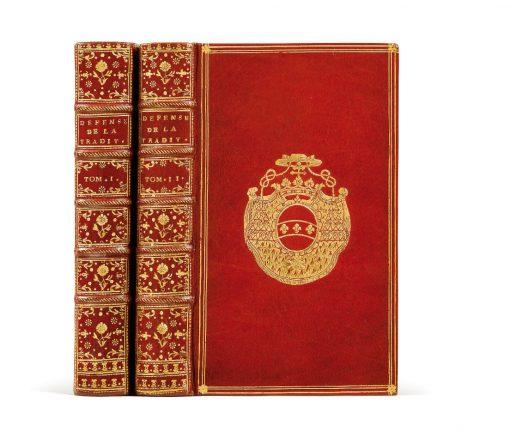 The Bossuet of the archbishop of Paris.

Magnificent copy
preserved in its contemporary morocco
with the arms of Christophe de Beaumont (1703-1781),
archbishop of Paris and a passionate adversary of Jean-Jacques Rousseau.

The archbishop of Paris Christophe de Beaumont’s beautiful copy, bound with his arms.

First 12mo edition and first separate edition of this important work by Bossuet.

“The importance of this work, which everyone agreed on, led to demands that a separate edition should be made, and in a format that would make it easier for it to circulate and be read by a large number of people. This work was undertaken to defend the Holy Fathers and especially St-Augustin against the attacks brought about with scandalous audacity by M. Simon in his Histoires critiques du Texte, des Versions et des Commentateurs de l’Ancien & du Nouveau Testament.

The illustrious author divided it into two parts. In the first one, he reveals the secret intentions of the man he opposes, uncovers the attractive artifice that caused the writer to make such mistakes and tries to convince him that the unfair censorship he cast on the Holy Fathers served no other purpose than hurting Faith in its core and casting criminal doubts on Tradition.

The second part, which is longer than the first, is dedicated to the defense of authority and of Saint-Augustine’s Doctrine. Bossuet begins by reinstating that this holy Doctor was considered by the Church, in his time, as the Defender of the true and ancient belief; that all of the centuries that followed considered him the same way ; that his Doctrine, especially in his later works, is out of reach ; that it was officially recognized by the councils and popes as being the Catholic Church’s and that, by consequence, to pretend to find, as does M. Simon, innovations in Saint-Augustine is adamant to criticizing that same Church”
(Journal historique sur les matières du temps, Mai 1764).

“A friend of the Jansenist, the archbishop of Meaux Bossuet was to become Simon’s principal opponent when his Histoire critique du Vieux Testament was published. Nicolas Toinard had given Bossuet a copy of the index and of the preface and Bossuet’s first reaction was the following : “This book is impious and a  rampart for loose morals”

At the height of his power and prestige, Bossuet appointed himself defender of the Catholic orthodoxy.

For Bossuet, Richard Simon’s hypothesis posed a great threat to the orthodox doctrine on inspiration and revelation. Simon did not manifest enough respect towards the Church’s traditions. Simon’s criticism of Saint Augustine were just as badly received.

Among other griefs Bossuet holds against Simon is the suspicion that he had ties with the French protestants.” (Le Grand siècle et la Bible, J. R. Armogathe).

Beautiful copy preserved in its contemporary red morocco with the arms of the archbishop of Paris.

Provenance : Libraries of Christophe de Beaumont, archbishop of Paris (arms) and André M. J. Jacques Dupin, with handwritten ex-libris and handwritten inscription of the following on a white leaf : “Read this book and read it again and if it suits you, give thanks to God. If it doesn’t, ask Him for the intelligence to be able to, and you shall receive.”

During his long tenure, he fervently opposed the Jansenist doctrine, fought against the court and Parliament and found in Jean-Jacques Rousseau a worthy adversary. Nothing could have undermined his determination to defend the principles of the Church and the Order of the Society of Jesus, even the most appealing promises made by the court to get him to resign from his Parisian office. This struggle came with numerous exiles to his castle de la Roque, in Conflans and la Trappe. (O. Hermal, pl.518).

Close to Louis-Philippe d’Orléans, king of the French in 1830, Dupin was an important political actor in French political life after the fall of Napoleon. In the Chambre des pairs he defended numerous politicians, including the maréchal Ney and Savary, and was, at the Chambre des députés, the reporter of the 1830 Charter.

He is the author of numerous books on French public ecclesiastic law and of Les Libertés de l’église gallicane, where Bossuet is honored for being the true representative of the Gallic church.

The marginal notes found here and there in the book were probably made by him.