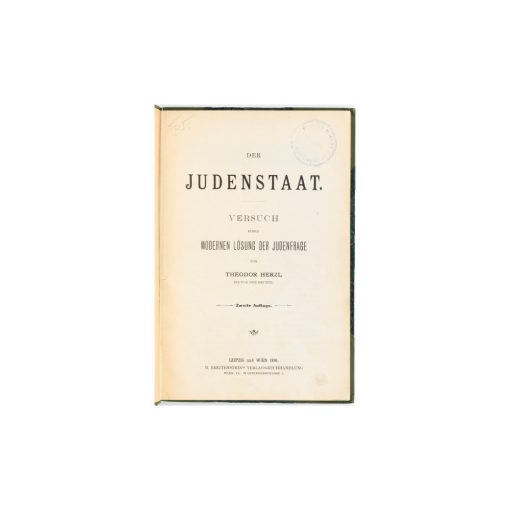 A beautiful copy, preserved in its contemporary binding.

Second edition of this founding manifesto of Zionism that majorly contributed to the creation of the State of Israel, published the same year as the first.

It was by Theodor Herzl.

In France between 1891 and 1895 as the Parisian correspondent of the Neue Freie Presse, his experience of the mass hysteria surrounding the Dreyfus case had convinced him that legal emancipation had come too late for assimilation to be feasible.

However, Siegfried Cronbach, publisher of a Jewish weekly, rejected it, objecting to its content, as did the reputable firm of Duncker and Humblot, which had recently published his Palais Bourbon but insisted that they never produced anything on ‘this question’.

Four so-called Auflagen appeared during 1896, no real distinction being made between Auflage, Edition and Druck. They were virtually identical, except for the vignettes on the soft cover and on the last page; those used for the first unnumbered edition differed from those used for the second, third and fourth editions.

In April 1896 another printing was under way. Der Judenstaat was printed in Latin and not, like Herzl’s other writings, in German type. A transcription of the German text into Hebrew characters and translations into English, Hebrew, Russian, Romanian and Bulgarian also, no doubt, reduced the demand for the Breitenstein editions.

Reactions to the Judenstaat were not long in coming.

The well-to-do Jewish middle class of Vienna was aghast, as Hermann Bahr told Herzl at the time and Stefan Zweig recalled in his memoirs. The Neue Freie Presse kept silent; for the rest the liberal press rejected the scheme. Encouragement came from Zionist groups in Berlin and Sofia, and the Russian Hoveve Zion cautiously took note. Unreserved acclaim came from the Zionists on the margins of Viennese Jewish society. These were the people who catapulted Herzl to the leadership of the nascent movement. By the summer of 1896 Herzl was becoming a man of action: Zionism had acquired a leader. This was the most significant, immediate result of the publication of Der Judenstaat. (Michael Heymann)

“Der Judenstaat, unlike other utopian models popular at the time, offered, so Herzl thought, a realizable model for planning, carrying out and establishing the Jewish state. Der Judenstaat outlines how to do this, what is needed and what the state will look like once it is established. The pamphlet-long book is divided into two sections; in the first section Herzl discusses anti-Semitism; in the second part he outlines a practical model for establishing a homeland. For Herzl, “the Jewish Question” is neither a social nor a religious one. It is a national question and to solve it we must first of all establish it as an international political problem which will have to be settled by the civilized nations of the world in council”.
(Leah Garrett)

“It was Herzl’s book which really crystallized the idea of a national home for the Jews. By his work, he transformed the Jewish people from a passive community into a positive political force. (…) That a Jewish State was created in Palestine within fifty years of his death was due to the vision and the practical methods of Herzl, expressed in his manifesto of 1896.” (PMM)