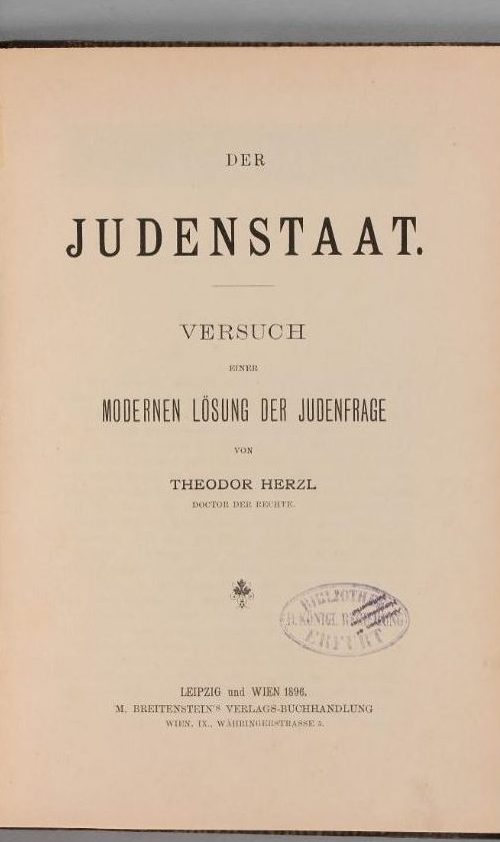 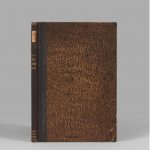 First edition of the founding of a Jewish state.

“By his work, he transformed the Jewish people from a passive community into a positive political force. (…)

That a Jewish State was created in Palestine within fifty years of his death was due to the vision and the practical methods of Herzl, expressed in his manifesto of 1896” (PMM).

First edition of this founding manifesto of Zionism that majorly contributed to the creation of the State of Israel.

In 1896, Der Judenstaat. Versuch einer Modernen Lösung der Judenfrage (The Jewish State, Proposal of a modern solution for the Jewish question) was published in Vienna by the 35-year old Theodor Herzl, a Hungarian journalist of Jewish descent. The previous year Herzl had witnessed the Dreyfus affair in Paris and had been appalled at the outbreak of anti-semitism that it had generated in the “birthplace of human rights”. He came to the conclusion that the creation of an independent Jewish state during the 20th century would be the best way for Jews to escape European anti-semitism.

However, Siegfried Cronbach, publisher of a Jewish weekly, rejected it, objecting to its content, as did Duncker and Humblot, which had recently published his Palais Bourbon but insisted that they never produced anything on ‘this question’.

Reactions to the Judenstaat were not long in coming. The well-to-do Jewish middle class of Vienna was aghast, as Hermann Bahr told Herzl at the time and Stefan Zweig recalled in his memoirs. The Neue Freie Presse kept silent; for the rest the liberal press rejected the scheme. Encouragement came from Zionist groups in Berlin and Sofia, and the Russian Hoveve Zion cautiously took note. Unreserved acclaim came from the Zionists on the margins of Viennese Jewish society. These were the people who catapulted Herzl to the leadership of the nascent movement. By the summer of 1896 Herzl was becoming a man of action: Zionism had acquired a leader. This was the most significant, immediate result of the publication of Der Judenstaat. (Michael Heymann)

“Der Judenstaat, unlike other utopian models popular at the time, offered, so Herzl thought, a realizable model for planning, carrying out and establishing the Jewish state. For Herzl, “the Jewish Question” is neither a social nor a religious one. It is a national question and to solve it we must first of all establish it as an international political problem which will have to be settled by the civilized nations of the world in council”. (Leah Garrett)

“It was Herzl’s book which really crystallized the idea of a national home for the Jews. By his work, he transformed the Jewish people from a passive community into a positive political force. (…)

That a Jewish State was created in Palestine within fifty years of his death was due to the vision and the practical methods of Herzl, expressed in his manifesto of 1896.” (PMM)

Der Judenstaat is considered to be the founding manifesto of political Zionism.