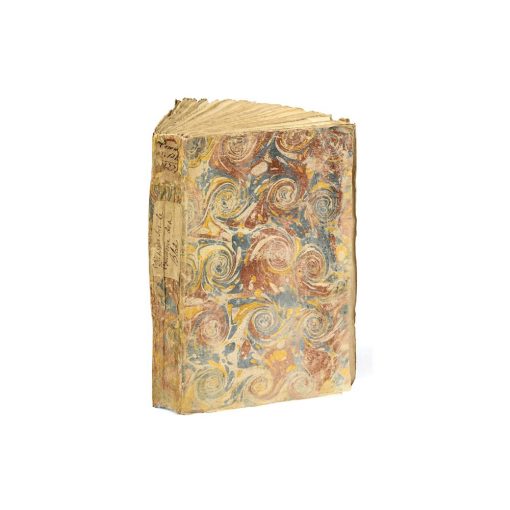 First edition of this treaty by Galiani
questioning the free circulation of grains
instituted by Louis XV.

“Oh ! what a pleasant book, a charming book

that is the Dialogues sur le commerce des blés !

How it overjoyed me !” (Voltaire)

A copy preserved in its contemporary wrappers.

“His eight dialogues (…) translated into French by Diderot, (…) are the most brilliant writings published up to that time in support of practical economics.” (Palgrave)

In opposition to the Physiocrats, the abbot Galiani exposes in this book his ideas on “the interdependence of agriculture, manufactures and the number of inhabitants”. (INED)

In the first of the eight dialogues, the author shares his reflections, following events of which he was a witness : he got this opportunity while on a trip to Naples and Roma after the famine and epidemics of 1764. The author tells of what he saw and shows that, because economical questions are always variable and hazardous, absolute laws cannot be applied.

“Through the artifice of a brilliant conversation are broached some of the principal questions treated by the Physiocrats. Galiani is not an enemy of the free exportation of grain as it was defined in France in the edicts of 1764. But he believes, like the Physiocrats, that some rules and restrictions pending to the diversity of the locations and the different methods used by the individuals should be observed. His direct experience of the disastrous economical policy of the kingdom of Naples illustrate his thoughts.” (Dictionnaire des Œuvres)

In a letter dated January 10th, 1770, that Voltaire wrote to Diderot to thank him for sending him the Dialogues, he says : “It seems to me that Plato and Molière got together to write this book. I have only read two thirds of it. I’m waiting for the denouement of the play with the utmost impatience. No one has reasoned better nor more pleasantly. How grateful I am to the author !”

Galiani was appointed embassy secretary in Paris where he lived ten years. He met the Encyclopedists and Diderot fell under the charm of the “small abbot”.

“I like this abbot a lot ; he grasps the oldest things from some secret angle no one had considered before”, and also : “Galiani entered and with him, so did gaiety, imagination, spirit, amusement and everything else that allowed me to forget the hardships of life.”

“Galiani, says Mr Blanqui, is one of the most renowned economists of Italy. He wrote to Mr Suard, in 1770, in regards to his Dialogues : “You who belong to the sect of Diderot and mine, do you not read the blanks in books ? Happy days that those who only read the print did not see anything decisive in my work ; but you, read the blanks, read what I have not written but is there anyway, and this is what you will find : “In all governments, under a despot, free export is no longer possible.” Strangely enough, Galiani opposed free export. But he was an embassy secretary. He wrote the print, one has to read the blanks.” (Catalogue de MM. Rostan et Pompeo Ferrario, n°487)

Before Galiani’s departure for Naples in 1770, pages from his book were already being read in the literary salons, to the great joy of his Parisian audience.

But Sartine, lieutenant-général of the police and, in that sense, in charge of bookstores, cannot allow a book that attacks with such humor and efficiency a doctrine that is still officially the state’s to be printed. He therefore demands that the text be given to him as soon as it’s off the presses to submit it to the censure of the Contrôle Général.