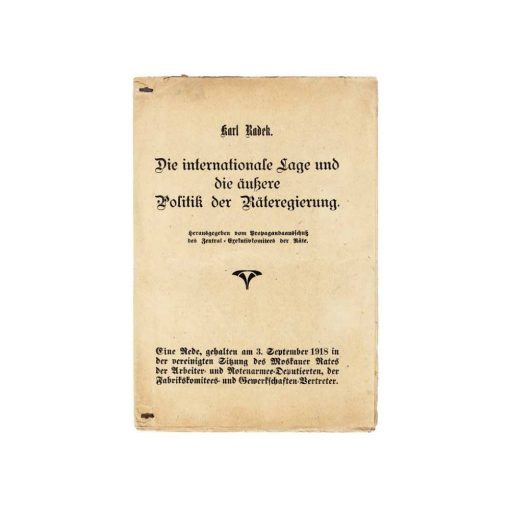 Rare first edition of this pamphlet by Karl Radek
seeking to export the Russian socialist revolution to Germany.

The copy is preserved in its contemporary publisher’s wrappers, as issued.

First edition of this pamphlet by Karl Radek seeking to export the Russian socialist revolution to Germany.

“If the Russian revolution is crushed by the bourgeois counter-revolution, it will be reborn like the Phoenix; if, on the contrary, it loses its socialist components and thus disappoints the working masses, then the consequences would be ten times worse for the future of the Russian and international revolution.” (Karl Radek)

Conscious of his responsibility towards the international proletariat, Karl Radek will submit the Bolshevik revolution to a radical criticism while in the heart of the revolutionary torment.

In this pamphlet, Karl Radek underlines the importance of the indispensable extension of the revolution outside the boundaries of Russia.

Born in 1885 in Austrian Galicia and deceased while in deportation in 1939 in circumstances not yet clear, Karl Radek was the wild child of the International socialist and then a prominent figure of the International communist before becoming Stalin’s personal advisor in foreign policy and disappearing finally from the political scene after an ambiguous performance in the double role of accused and accuser at the Second Moscow trial.

Having roots in many cultures, Radek was a polyglot propagandist, a brilliant and prolific revolutionary of the word. His boldness and lack of scruples led him very early on to call out the elite of European socialism, from Rosa Luxemburg to Lenin, Kautsky and Bebel.

Radek bonds with Lenin, who puts him in charge of building the first core of the new International.

The October revolution transformed this pariah into the vice-commissioner of the people for Soviet Russia propaganda.

When the Reich falls apart, he clandestinely arrives in Berlin to join in the foundation of the first European communist party, of which he will be the brain up until the failure of the October insurrection of 1923. True bridge between the German and Russian movements, Radek also illustrates through his functions the intricate links between the International communist’s policy and the Soviet State.

“An uncommon individual, one the key players of the first years of the International communist and a prolific author, Radek was not only one of the first characters of the International — and even its secretary for a few months — but also the mentor of the German communist party until the 1923 fiasco. Radek was proclaimed an “enemy of the people” in Stalin’s time and considered by Trotsky to be a “cynical clown”.”

The copy is preserved in its contemporary publisher’s wrappers, as issued.

Missing in the Bnf.