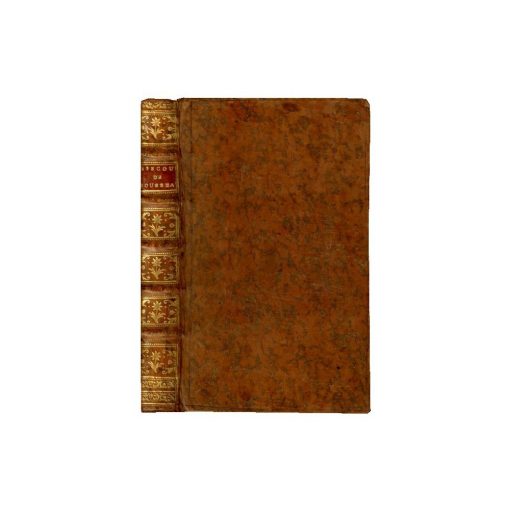 From the Fürstenberg library.

First edition of Rousseau’s essential Discours which “marks a capital moment in the history of political doctrines”.

In keeping on all points with Dufour’s description, it is decorated with a “fleuron-vignette by Fokke on the title representing Liberty sitting down, a beautiful frontispiece drawn by Eisen and engraved by Sornique and a fleuron on top of the dedication with the arms of the Republic of Geneva signed by Fokke.” (Cohen)

In his Confessions, Jean-Jacques Rousseau narrates his 7 or 8-day trip to Saint-Germain to ponder on the great subject that the Académie de Dijon had dared to propose for its exam in 1754: What is the origin of the inequality among mankind? ; “As it had had such courage, I could have the one of trying to answer and undertook such a task.”

In this now famous essay on which a part of modern political literature stands, Rousseau exposes the foundations of his doctrine by declaring that all the evils, miseries, aberrations, causes of inequality among men are all consequences of the social state.

“Rousseau’s contemporaries saw in this pamphlet a harsh indictment against the social and political institutions of their time and praised the author, this bold practitioner who had dared to bury the lancet deep inside the wound. His Discours marks a capital moment in the history of political doctrines; it contains elements of the thesis Rousseau will defend in the Contrat Social, a work of reason and law destined to found the reign of justice and collective happiness.” (Dictionnaire des Œuvres)

“There exist some copies on thick paper.” (Tchemerzine)

“On page 11, on the copies of the first issue, the word “conformé” was amended by hand by the bookseller Rey, who added an accent on the last letter.” (Dufour)

The Fürstenberg library was one of the most important private collections of rare and precious books. Hans Fürstenberg, who came from a family of Berliner bankers, was mostly renowned for being a great bibliophile.