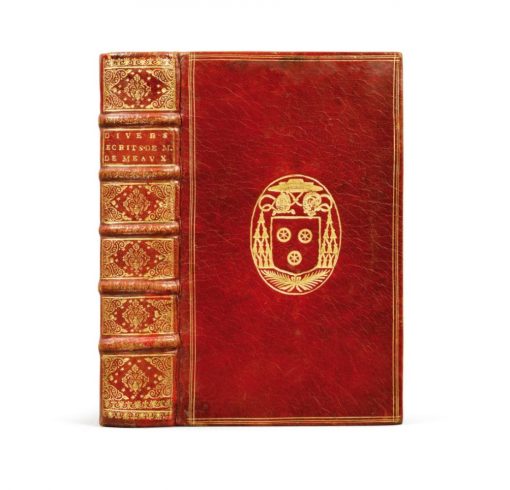 First edition of the Divers écrits by Bossuet,
bound in red morocco with his own arms.

First edition of the Divers écrits by Bossuet, “one of the most important works”  (Jacques Guérin).

“When it comes to French prose, which is infinitely superior than what we call poetry, Bossuet is the great French master. His language contains all of the canons of the way we speak and beautifully fills up our mouths and chests. It’s something like de Dumont’s Royal Mass, so well adapted to the lungs of our old bards. Furthermore, Bossuet is in our language the best doctor of Catholicism. His theoretical books have such strength, intelligibility and majesty that they bathe the soul in light and fill it with joy and admiration.” (P. Claudel).

The author’s precious copy bound in contemporary red morocco with the arms of Jacques Bénigne Bossuet.

Having resigned from his bishopric in Condom to become the Dauphin’s tutor in 1670, he became the first chaplain of the Dauphine in 1680 and then bishop of Meaux in 1681, head of the collège royal de Navarre in 1695 and an advisor to the king two years later.

He only owned books on theology, canon law and the councils which he used, among other things, to prepare the sermons, eulogies and controversies which made him famous (especially the controversies).

He passed it down to Jacques-Bénigne Bossuet (1664-1743), archbishop of Troyes, who considerably added to it.

On the recto of one of the first endleafs there is a long handwritten note on the provenance of this copy and Bossuet’s arms.

Jacques Guérin, one of the most illustrious bibliophiles of the 20th century, owned a copy very similar to the Grand Dauphin’s, bound in contemporary morocco with the arms of the duke de Maine, sold 12 500 € 32 years ago, and described as following:

“First edition of one of Bossuet’s major work and the book one must have regarding the Quiétisme controversy and the struggle between the archbishops of Meaux and Cambrai.” (Réf : Bibliothèque Jacques Guérin, Très beaux livres anciens, Paris, 29 mars 1984, n° 13).

The most prestigious copy recorded.