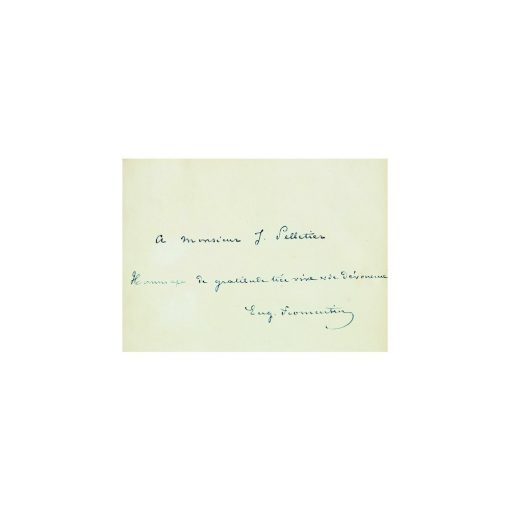 First edition of Dominique,
the only novel by Eugène Fromentin.

A copy on large Dutch paper,
“printed in very small numbers and quite rare” (Carteret).

Copy includes an autographed note by the author to Jules Pelletier,
secretary general of the ministry of Finance and a friend of Fromentin.

First issue, with a typo on page 177, “en sueur” which will be corrected into “censeur” and a mistake that only exists in the large paper, p.191 “je reçus” instead of “je relus”.

“Dominique is in parts autobiographical ; it is significant in the sense that Fromentin, a quality painter, an able writer, a profound critic of Flemish and Dutch painting, who knows his limits perfectly well, tried to write about the renunciation a man must accept when he realizes he doesn’t have the strength to be the one he dreamed of in his proud youth. Here is the profound message of the novel and this is most probably what distinguishes him from all the other masterpieces in the autobiographical psychological novel genre. The autumnal, nuanced tone, moderate even when being effusive, the transformation of the ingenuous and romantic fervor into an almost classical attitude, these are the elements that make this work original and endearing.” (Dictionnaire des Œuvres)

“The autobiographical novel “Dominique” brought Fromentin lasting glory. The novel is considered a classic today. The protagonists Dominique and Madeleine have almost become literary stereotypes. The subtlety of the thoughts, the elegance of the theme, the truth revealed in the psychological portraits, the simplicity of this human drama, that would be mundane if not for the elevation of the feelings that course through it, the accuracy of the descriptions and the way this loving confession is both distant and confidential all contribute to making this novel a masterpiece.” (Talvart)

The story of Dominique, inspired by the love between Fromentin and Madame Howland, was met on publication with admiration amongst the young naturalist school.

Flaubert, who was about to start revising L’Education sentimentale, wrote to Fromentin that he had read his whole novel in one sitting : “I burn with the envy of seeing you soon so that we may talk about it and I can congratulate you.”

On the 20th of January 1863, Ludovic Halévy told Fromentin that Dominique would remain “one of the most complete and touching work of literature of all times.”

“Eugène Fromentin (1820-1876) is a great painter, a delicate artist whether it be with a quill in his hand or with a paintbrush.” (Carteret)

One of the very rare copies on Dutch paper, a first issue, preserved in its contemporary binding and including an autographical note by the author : “A monsieur J. Pelletier Hommage de gratitude très vive et de dévouement, Eug. Fromentin”.

Jules Pelletier, conseiller d’Etat and secrétaire général au ministère des Finances in 1863 (ministère Fould), was approached by Baudelaire between 1858 and 1862 who hoped to obtain a grant from the Emperor.

“When M. Fould was a State minister, he had appointed to work by his side a young energetic man who had a marvelous aptitude for business : Jules Pelletier. He quickly became secretary general. Through this position, he came in frequent contact with writers and artists. L’Académie des beaux-arts opened its doors to Mr J. Pelletier not only because it saw in him a man able of giving out work but mostly because he was an artist through and through. He was also very knowledgeable, and a great amateur of books.” (E. About, Causeries, p.107)