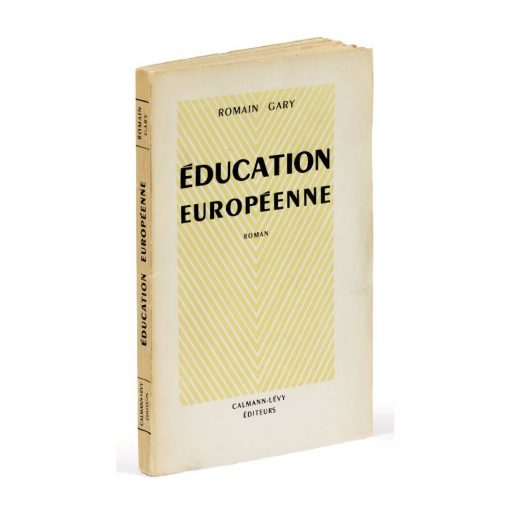 One of 200 numbered copies
printed on Outhenin-Chalandre paper, only large paper.

An attractive copy, pure, uncut,
preserved in its wrappers, as issued.

One of 200 numbered copies printed on Outhenin-Chalandre paper, only large paper. “Written during the war and a recipient of the prix des Critiques in 1945, Education européenne is a powerful novel on the barbary of war in opposition to the refusal to despair.” (A. M)

“L’Education européenne is a successful book. It was written in troubled times, far from the Poland and the “white hell of its forests”, to salute the resistance of men in a cruel and meaningless world — the trap of the human condition.” (André Brincourt, Littératures d’outre-tombe)

In a forest close to Wilno, Polish partisans survive in small numbers : students, men escaped from the Polish army, sons of peasants, they all went underground to seek revenge on the Germans. The issue of the battle of Stalingrad is still uncertain.

Often in the evenings, nestled in shelters covered with branches, we listen to Dobranski’s stories. He is writing a book titled “Education européenne”. For some of his comrades, this education is the product of “bombs, massacres, shot hostages, men forced to live in holes like beasts” ; for him, it’s “freedom, dignity, the honor of being a man”, “everything that keeps man from despair”.

Janek is fourteen years-old, he is the youngest of the group. His father had built him a shelter in the forest and brought him food. One day, he didn’t come. So Janek joined the partisans. He will later hear of the circumstances of his parents’ death, killed by Germans. He meets Zosia, a girl barely older than him, and the two teenagers sometimes dare to hope for a better world where they can teach their children to love and not hate.

At the end of the war, Janek will have seen almost all of his friends die. He has also learned to kill. Dobranski, as he was dying, did however give him some of his hope.

“Romain Gary, who bravely fought in the Allied aviation during the war, chooses to write a fiction on the fights of the Polish partisans in Education européenne. This first novel raises an essential question that will often be repeated by the author and has to due with the very possibility of literature after the monstrosities of the Nazis : what is the worth of European culture if it was able to give birth to such horrors ? How is it possible for the western humanist tradition to continue after such a barbaric episode, especially since it didn’t come from the outside but from inside old Europe ?” (Denis Labouret, Littérature française du XXe siècle)

“Deeply rooted in the resistance to totalitarianism and the souvenir of the Shoah, Romain Gary’s work revolves around the idea of a generous humanism, open to cultural diversity, and relentlessly denounces all types of segregation.” (Pierre Bayard)

An attractive copy, pure, uncut, preserved in its wrappers, as issued.