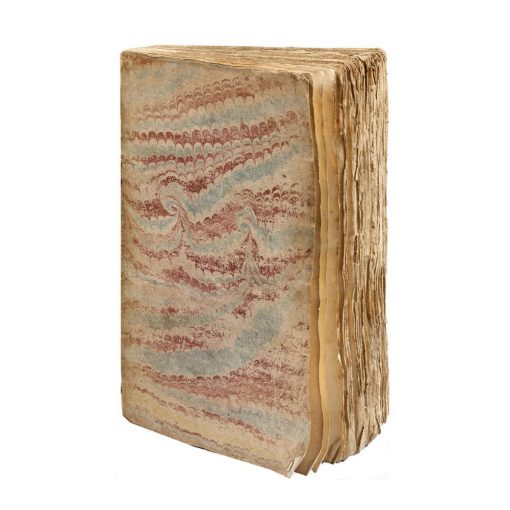 First edition of this text by Voltaire
which rendered Newton accessible to the French
and paved the way for the spirit of the Enlightenment.

First edition of this important scientific text in which Voltaire tries to mainstream Newton’s ideas to the French general public.

This “masterpiece of clarity, elegance and scientific discussion” (F. Bouillier) is a prelude to the Enlightenment.

The text is abundantly illustrated with diagrams and mathematical figures and 7 plates out of pagination, of which one is folding. It includes a portrait of Voltaire, an engraving in frontispiece, 25 vignettes, 25 tail-pieces and a great number of geometrical figures engraved by Folkema, J. V. Schley, Decave, B. Picart and G. Konder.

“A popularization of Newton’s scientific and philosophical ideas, Voltaire’s Elemens presented Newton as the discoverer of the true system of the world and the destroyer of the errors of Cartesianism.” (Norman, n°2165)

When Voltaire was writing his Lettres d’Angleterre, the French intellectual world was Cartesian. Newton’s physics definitely took over Descartes’ around the year 1750 thanks to the publication of the Eléments de la philosophie de Newton (1738), a text destined for the general public, in which Voltaire illustrates the English sscientist’s physical and metaphysical theories.

It was very audacious to offer Newton as the ideal type of the philosopher and to expose Locke’s empirical theory on the question of the soul in the France of Descartes and Malebranche. It meant directly touching upon the Christian conception of man, seeking emancipation from theology and declaring complete trust in the forces of reason and science.

“To get an idea of the role played by Voltaire in the transmission of Newton’s ideas in France, let’s start by reminding that the text where he exposed Newton’s world system was edited 26 times between 1738 et 1785. It is by reading Voltaire that, in the 18th century, people learned of the laws of universal attraction. Newton did publish his Mathematical principles of natural philosophy in 1687 but fifty years later, the French were still, for the most part, faithful to Descartes. It is not until 1738 that the French change their views on the world, and it is only due to Voltaire’s relentless defense of Newtonian science. Voltaire managed to render Newton accessible to all. He speaks to those who only know Newton by name. He does not speak to the scientists but to those who have some philosophical dispositions. The readers to whom Voltaire speaks are the future readers of the Encyclopédie. Being a good popularizer, he is the one who first told of the anecdote about the apple.

Voltaire, by writing the Eléments, inaugurates a new way of presenting science: it is no longer about entertaining and pleasing the marquises but about educating them by getting them to understand that being a savant is not so obvious.” (C. Paillard, Le problème du fatalisme dans la philosophie de Voltaire)

A precious copy, with wide-margins, untrimmed, on thick Dutch paper, preserved in its contemporary wrappers.