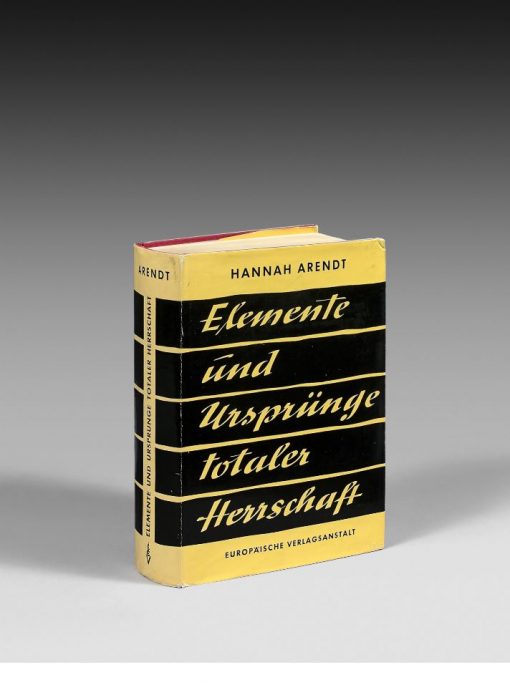 The Origin of totalitarianism had a tremendous impact on the world.

A beautiful copy preserved in its binding and flap jacket, as issued.

Red cloth, title on spine in gilt, name of author and title on front cover in gilt, complete with the publisher’s illustrated flap jacket. Publisher’s binding.

No large papers were printed.

« A few years ago, Hannah Arendt published her book in New York and London, first written in English. When she translated it into German, her maternal tongue, she perfected it, added to it, shortened it, constantly alert but without much altering it. […] Naturally, I prefer the German version. […] Her thought process is of German and universal origin, nourished by German philosophers like Kant, Hegel and Marx, the German spiritual sciences, and also, for the most part, by Montesquieu and Tocqueville. This way of thinking explains the splendid openness of the German spirit. » (Karl Jaspers)

The Origin of totalitarism had a tremendous impact on the world.

« Published in 1951, this work by the German philosopher Hannah Arendt (1906-1975), is made up of three parts : On Antisemitism ; Imperialism ; The Totalitarian System. It is not a history book in the traditional sense of the word. […] Because it’s premise is precisely to think the unthinkable, to explain that which cannot be explained, Hannah Arendt refuses, in the face of « totalitarianism’s terrifying originality » to adhere to traditional historical sequence and linear causality.
The three phenomenons here treated — antisemitism, imperialism and totalitarianism — have one thing in common : their radical novelty cannot be reduced to previously known historical forms. (…)

Arendt’s analyses have had a considerable influence on all following interpretations of totalitarianism. » (Dictionnaire des œuvres).

In the preface to the first German edition of The Origin of totalitarianism, Hannah Arendt explains how she proceeded to translate from English into German : « This is the German version of the book The Origins of Totalitarianism, published in the spring of 1951 in the United States. It is not a faithful translation of the English text. I wrote certain chapters in German and translated them later into English ; in which case, I inserted the original text […] ».

« Hannah Arendt is one of the most important intellectual figures of the 20th century. Her work draws on philosophy, politics and ethics. Anti-nazi activist from the beginning, she reflects on the chaos of the world. She has fought for human rights, has theorized on the perils threatening democracy, she is a thinker of anti-totalitarianism and took part in her century’s main fights. » (Laure Adler)

A beautiful copy preserved in its binding and flap jacket, as issued.

No copy has been listed on the international public market since the beginning of the survey, 35 years ago (ABPC).